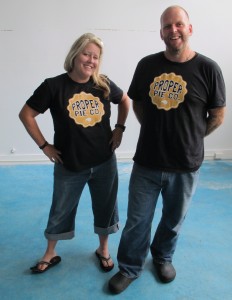 After rocking and rolling across the world in search of a good pie, Neil Smith and Nikki Price gave up.

They’re going to make their own.

Smith and Price plan to open Proper Pie Company in Church Hill in the next few months. They’ll have plenty of variations on the main theme, such as family-size fruit pies and 5-inch handheld meat pies, a casual dining staple in Smith’s native New Zealand.

Getting “a pie in New Zealand is like getting pizza, or grabbing a burger here,” Price said.

Smith, a chef by trade, spent 10 years cooking for rock stars with a London-based catering company. The job took him around the world with acts such as Jay-Z, Neil Young, Green Day and Britney Spears.

Smith met Price, a VCU graduate, in 2006, when he came through Richmond during a Nine Inch Nails East Coast swing.

The two married in 2008, and Smith gave up the touring job and settled in Richmond last year.

Proper Pie is being financed in part by a $10,000 grant from Bon Secours, which Smith and Price won in October.

The pair signed a lease on 1,000-square-foot shop at 2505 East Broad St. last month, and moved in July 1. It Must Be Heaven Ice Cream and Desserts previously occupied the shop.

Price says the company needs about $50,000 to get started but has her fundraising goals set a little higher.

Price and Smith have received some investments from family and friends and are setting up an online crowd-funding campaign at Kickstarter.com.

The shop will feature a fixed menu of pies with standard meats and fruits and a rotating seasonal menu.

Smith is working from many classic New Zealand recipes but said there is plenty of room to tinker. 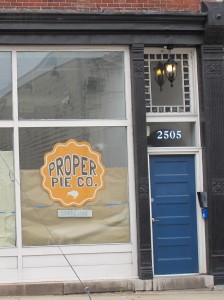 Single-serving pies will cost between $5.50 and about $7.

Proper Pie will be open Wednesday through Sunday at first, but the team hopes to become a seven-day-a-week operation. Smith and Price also hope to start a Proper Pie food cart so they can take their food to fairs and festivals.

The first-time entrepreneurs are still on the business side of the shop, but Price isn’t worried at all about the product. She’s already picked out her favorite: a chicken and sweet potato variety common in New Zealand.

“I ate an award-winning pie in New Zealand, which was chicken and kumara, and couldn’t believe how delicious it was,” Price said. “Then I tried ours, and it was better.”

Sounds like a fabulous idea but I was unable to locate it on Kickstarter.com.

Hi Jill! We are actually in the process of setting up the Kickstarter now! It should be up in the next few weeks. Thanks!

Looking forward to trying these pies. My fiancee will jump for joy knowing that such an establishment is only a couple blocks away.

Sounds great, but it will be tough to open in a few months without having raised all the funds yet. Planning, permits and build-out will take at least that long and that’s after you have all the money. I can’t wait to try them though. It will be a welcome addition to the neighborhood once it opens. Good luck!

Looks great! Any room for a barber shop upstairs?

I love coffee and pie! Can’t wait for you to open. We will drive from the Midlothian suburbs for good pie. Best wishes for much success.

As a Kiwi living in Richmond, one thing I miss is a good mince pie. Really looking forward to Prosper opening. Having to ship them from Dub Pies in New York gets expensive!

I had no idea there were so many Kiwis in ye ol’ RVA ! I wonder why y’all would move from paradise to RVA … RVA’s pretty awesome, but there are no Hobbitons around here. Anywhose, glad y’all are here ’cause I just tried a Mince Pie two days ago and it was a whole-body experience! Makes me want to move to NZ so I can get them all the time everywhere.

Another solid addition to Church Hill. This neighborhood keeps getting better and better. Can’t wait for pie!

Don’t forget to let me know when is opening day, Luv Ya, U. Gerry

THis Aussie cannot wait for you to open.You are living my dream

I WILL drive from DC for your pies!! Will there be sausage rolls too? I may need to move closer lol. Good luck, please post when you open 🙂