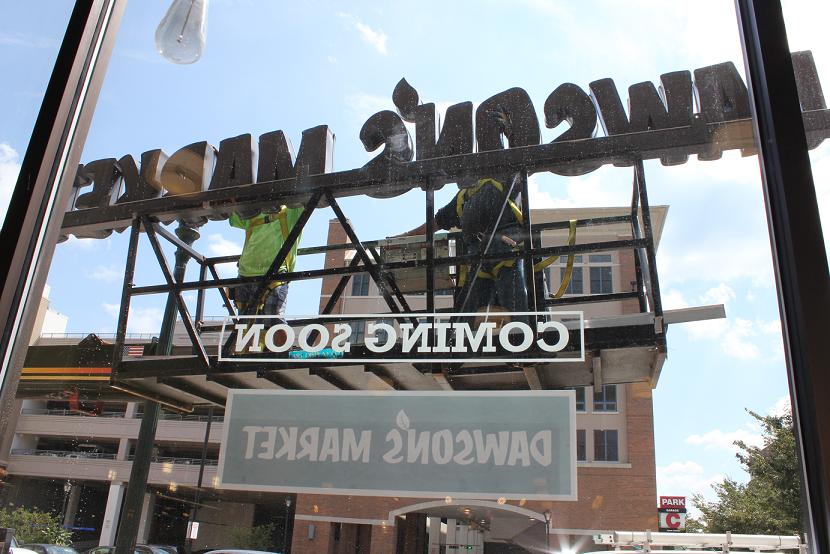 The view from inside the new Dawson’s Market as its prepared for next week’s opening.

A Richmond-based grocer finally has its first out-of-town location.

The 17,500-square-foot store is the grocery anchor of Rockville Town Square, a large mixed-use, town center-type development in Montgomery County.

Rick Hood founded the natural/organic grocer in Carytown at the intersection of Ellwood Avenue and Thompson Street.

The company has tried since at least 2009 to expand into the Washington area. It had plans for a 15,000-square-foot store in the District’s Columbia Heights neighborhood but put the idea on hold citing at the time the struggling economy.

It then began negotiating with Federal Realty Investment Trust, the owner of Rockville Town Square, in May 2011. Federal Realty also owns the Willow Lawn shopping center.

Ellwood Thompson’s spokesperson Becky Lakin said that the build-out began in Rockville this summer and that the store would open Saturday, Sept. 29.

“This has been a process of four or five years of looking at this region,” Lakin said.

Although slightly smaller than Ellwood’s 20,000-square-foot Richmond store, the new store’s product offerings and layout will be similar.

“The difference is going to be in what we carry that’s local there,” Lakin said.

The company’s policy is to carry many products that come from within 100 miles of its stores.

“We’ve had to go out and find new local vendors” in Maryland, Lakin said. 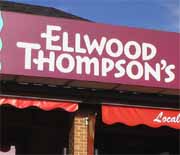 While the Ellwood Thompson’s name was inspired by its Carytown location, the Dawson’s Market name is based on a bit of Montgomery County grocery history.

The Dawson family is one of the county’s oldest families, having settled there in the 1600s and opened one of the area’s first general stores, called Dawson’s Store.

“Our focus is really supporting the local communities that we are in. Part of that is connecting to them through history,” Lakin said. “The name was an effort to do that.”

The new store will start out with 80 to 90 employees. That adds to the company’s 130 employees in Richmond.

With the long search for a second store out of the way, might a third be in the works?

“Right now we’re just worried about this one,” Lakin said.

I wonder why Coca Cola never thought of using a different name every place they sold their beverages?

Is Ellwoods witnessing end times here in Richmond so this is their way of jumping markets? Why else would they not keep the brand other then to be faux local. Why don’t they just open a new grocery store here and rebrand using famous Richmond grocery history, perhaps- Ukrops Local Market. To Soon?

I love EllwoodThompson’s and am happy to see their expansion plans come to fruition! What a smart idea to brand themselves with a local connection in MD…when combined with localized sourcing (within 100 miles) they will be real. The fact that two store brands are sharing corporate overhead, processes, infrastructure is a way to remain competitive and smart business. (P.S. – Their “Living Kale Salad” on the salad bar has made me a big kale fan. And it scores high on the Joel Furhman ANDI scale.) Linda

So is Ellwood/Dawson becoming the “Big Box” that they so vehemently warned us about before Fresh Market moved to Carytown?

When do they cross the line from locally-owned-and-operated to chain? Even the big box regional and national chains have commitments to source certain products from the local communities. It’s a noble gesture but not necessarily uniqe any more.

Surely most of the profits from the new store will not stay in the local Maryland community.