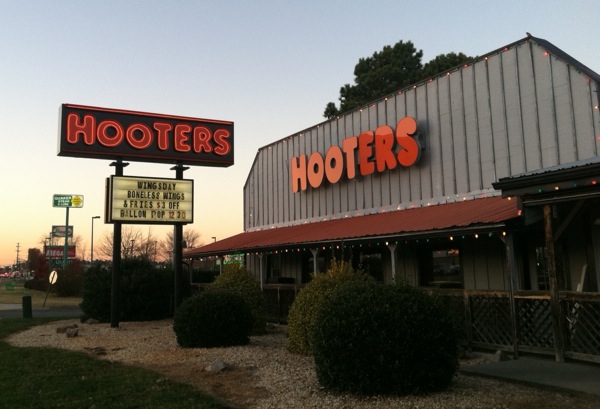 A Richmond restaurateur whose holdings include a dozen Hooters and Topeka’s Steakhouse locations has filed for Chapter 11 bankruptcy protection. (You can see the full filing here.)

Cornett Hospitality LLC, headquartered on Staples Mill Road, made its filing Wednesday, listing 287 creditors and liabilities of between $1 million and $10 million. It lists assets of the same range.

The company owns nine Hooters restaurants and three Topeka’s locations in Virginia, West Virginia and Pennsylvania. It previously owned two Max & Erma’s locations in Richmond but closed them after falling behind on rent and after the chain filed bankruptcy in 2010.

Its local Hooters stores include 7912 W. Broad St. in the West End, 1211 Huguenot Road in Midlothian and 2401 W. Hundred Road in Chester.

Its local Topeka’s locations are on Parham Road near Three Chopt Road and on Hull Street Road in Midlothian.

Reached by phone Wednesday, Phil Cornett, a director of the company, said its 12 restaurants remain open for business while the company goes through the Chapter 11 process.

He mentioned Max & Erma’s as a reason why the company filed for bankruptcy protection.

“It’s just wrapping up some of the old baggage from Max and Erma’s,” Cornett said. “It’s just a standard reorganization, just standard stuff.”

In early 2010, Cornett was locked out of its Max & Erma’s location at Reynolds Crossing after falling behind on the rent. Cornett at the time cited the chain’s bankruptcy as part of the problem. Cornett eventually closed the restaurant, which is now a Plaza Azteca.

Reynolds Development eventually filed suit against Cornett, seeking more than $100,000 in back rent and other fees.

Cornett also closed its other Max & Erma’s location on John Rolfe Parkway in October 2010. Phil Cornett had said then that the location was hamstrung by repeated delays to access roads that would have made the location busier.

It owes $1.8 million to Bank of Virginia, according to the initial filing. The Midlothian-based bank filed suit against the company for that amount in March 2011. Cornett owes $210,000 to StellarOne, which filed suit against Cornett for $1.95 million in August 2011.

Bruce Arkema, an attorney with DurretteCrump, is representing Cornett Hospitality in its Chapter 11 case.

Getting out of paying debt is “just standard stuff”

Agreed Beth… this isn’t just a little debt. Owing that much money to so many different people is a big deal. Amazing he’s stayed in business this long.

Yes Beth–it seems in today’s world being irresponsible and running from debts you incur willingly is just standard procedure. Bet he lives in a nicer house than you or I but God forbid you sell stuff to be honorable.

Grayon, he does own a nicer house than all of us. Take a look at the bankruptcy filing. The Cornetts took out a loan, evidently from John Whitlock of the Whitlock Company for $385,000 and pledged their house for collateral. Their house is located at 5908 Three Chopt Road, Richmond, Virginia 23226, It is, not surprisingly, for sale for $2,395,000.

I worked at one of the restaurants and while my co-workers and most managers were awesome and are some of the best people on the planet, the restaurant is run horribly and in extreme disrepair. Its no wonder this has happened and those of us who have left have been believing it was coming for a long time. Oh and Beth, thats Phil Cornett for you, from all I’ve heard he’s a very disingenuous person. I would certainly not use him as an archetype for all business owners for he is far from the average. Unless one is talking of… Read more »

I have just noticed that one of the creditors on the bankruptcy filing relates to $385k of improvements made to their home on Three Chopt (which, according to Zillow, is currently on the market for … wait for it …. $2.4m). How does that count as a business expense? So does this mean that the contractor who did work at the Cornett ‘home’ is only going to get paid cents on the dollar … what kind of person does this? And how is this expense related to Max & Erma’s per Mr Cornett’s comments?

Who put’s their home up as collateral for a business loan? Someone personally vested in their company. And, would they sell if not to benefit the company…surely not. This is a Richmond based company with many local jobs relying on it’s success. I certainly hope this restructuring helps them succeed.

I was not surprised to see this…though I will say this was done as a last resort and with much hesitation. Many would have filed long ago and he certainly tried to come out of the financial pit on his own. Georgia, you are right…putting your home up as collateral for a business loan does demonstrate that he WAS vested in his businesses but also, that things were getting more and more dire. Another victim, at least partly, of the economy.

Georgia – successful businesses create jobs, badly run businesses just jeopardize them. Maybe another franchisee would do a better job. This guy seems to be less than completely honest – suggesting that the whole thing is related to the Max & Erma’s situation is just disingenuous. If you look at the recent reviews of all his restaurants – they’re poor. Perhaps the restaurants need good management to turn them around. Cornett getting out of paying his debts in full and ‘restructirng’ his business doesn’t bode well unless he’s prepared to resign his position – his own decisions brought this about… Read more »

Let’s keep it real and simple folks.
No construction = No Hooters.

4 years ago, any rainy day those restaurants would be packed with construction workers…

Mr. Cornett has worked diligently to make this work. As has been stated, he has pledged his home and I suspect has signed personally on much of the debt. He stands to lose everything. To criticize him for the size of his home is inappropriate…it is not fair to judge others. I have observed many run to the cover of bankruptcy quickly. As was stated in the RTD this morning ha has been trying for 18 months to work this out. I wish Mr. Cornett and his family the best during what I am sure is a very difficult time.

hahah gotta love balloon spelled as “ballon” on the sign!

Zoey, That says “Billon Pop”, Not Ballon Pop. Everyone else, On local News12, They are reporting The Owners is Filing SPECIFICALlY to save the jobs of his employees, NOT HIS OWN A$$, So those wishing him justice or bad mojo because he is rich, Ask you self “What is rich?” I myself am a small Business owner. On paper, I’m work more than $1M, but I live week to week with the bills, just like most everyone else. I actually had more money while I was in the military. Everything I own is wrapped up in my business. Sometimes banks… Read more »

I don’t think anyone here in any of the comments I’ve read have expressed anything close to jealousy or envy for him having “tried for a better life.”

I know Phil and his family personally and I can tell you that they are good, HONEST and genuine people. When times were good, they have been some of the most generous people giving back to the community in which we live. Do not judge or find any joy in another person’s pain and now public failure. These situations are very complex and come about for a variety of reasons, some of which are self inflicted and some of which are out of your control. Phil is not trying to mislead, scam or cheat anyone out of anything. He is… Read more »

So true Paul, and well said.

I am surprised at some of the comments here. When the economy took a turn, restaurants were hit hard. People who were affected by less income and loss of jobs stopped going out to eat. I’ve done business with Phil for many years, and he ALWAYS paid his advertising bills. He’s worked very hard for the house he lives in and everything in it — and I’m sure he’s reeling from having to put it on the market. Don’t judge this man, unless you’ve walked a mile in his shoes.

Don’t you get it? In these times we are living in, it is not polictically correct to want to make money or be successful. Come on, get with it guys!

Casting stones at someone who has been in this business for no less than 20 years…many of them very sucesssful…because he is having a hard time making it in the food industry after five years in this ecomony. Seriously? I happen to know he has sold a lot of his assets to stay afloat and done everything he could before turning to this.