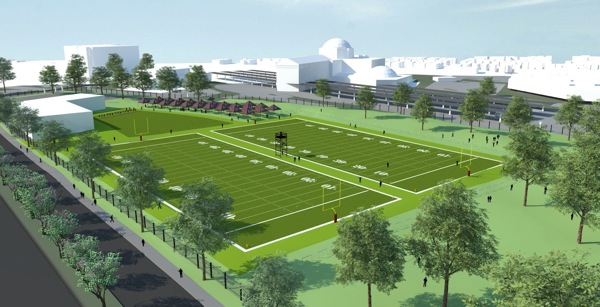 A rendering of the planned Redskins training camp behind the Science Museum.

The Richmond City Council has called an audible on the mayor’s deal to bring the Redskins’ training camp to Richmond.

A resolution authored by council member Chris Hilbert that asks the Bon Secours health system to pay an extra $1 million over 10 years was approved unanimously Monday night. That would bring the health system’s total commitment to the deal to about $7.4 million.

Hilbert’s resolution funnels a $100,000 annual payment from Bon Secours to city schools for capital improvements. The deal also moves to schools the more than $500,000 in anticipated annual tax revenue generated by the deal. Adjusting for inflation, that would mean about $4.5 million for the school system over 10 years.

Hilbert said at the meeting that he withheld his support from the mayor’s deal because he felt it violated in spirit a 2008 ordinance that dictated that money generated by the sale of city school properties would go back to the schools. The deal with Bon Secours involves leasing a city school property.

The mayor’s deal gave Bon Secours the use of the Westhampton School property at Patterson and Libbie avenues in exchange for a $6.4 commitment for a Redskins training facility and an expansion of its East End Richmond Community Hospital property.

Hilbert’s resolution also makes clear that Bon Secours would have to go through the city’s special-use permit process before it starts construction. That would ensure the city could enforce its expressed desire that Bon Secours preserve the 95-year-old school building.

“We’ve made it very clear up front that any special-use permit will have to be approved by this body,” Hilbert said. “There are no guarantees and no pre-approvals.”

The council also passed five ordinances that give the Westhampton School to Richmond’s Economic Development Authority for development and approve the financing of the deal.

Once again we have proven the naysayers wrong that the City of Richmond is unable to get a good economic deal to the goal line. the Mayor had already cut an admirable deal and the tweak by Councilman Hilbert makes the proposal ironclad. I have developed many drug stores in my career and the thought that walgreens would step up and pay the money bandied about in the papers is probably a pipe dream. further the proposed deal creates many more jobs in all parts of the city and keeps the hope alive that one of our architectural treasures will… Read more »