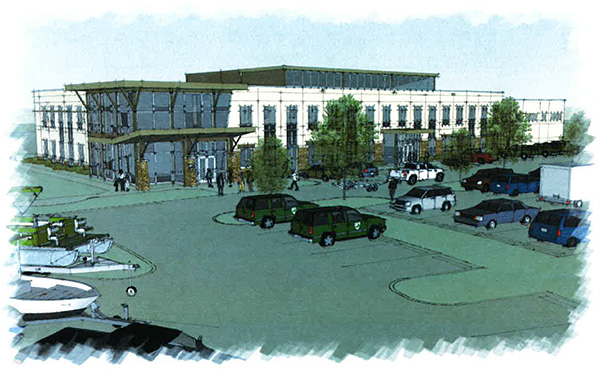 A rendering of the new the Department of Game and Inland Fisheries headquarters. (Courtesy DGIF)

Things are hopping in Hanover County.

The Commonwealth of Virginia has inked a deal for 14.5 acres near the intersection of Lewistown Road and Lakeridge Parkway just off Interstate 95, the second big land deal in that section of Ashland in the past two weeks.

The state is planning to build a 45,000-square-foot headquarters there for the Department of Game and Inland Fisheries. The project, just up the road from Bass Pro Shops and the Winding Brook development, is expected to cost about $10 million.

The property was purchased from developer Gibson Wright for $1.48 million, whose land entities three days later sold 43 acres across the street to California-based developer Craig Realty Group for a planned 392,000-square-foot outlet mall.

“We have signed a comprehensive agreement with the developer, and right now we are producing the final plans for the building,” said Matt Koch, chief operating officer of the Department of Game and Inland Fisheries.

The state’s property is to the northwest of Craig’s outlet site.

The project will be run by Thomas Kinter, a developer with the firm General Land Companies, under the entity Northlake DGIF LLC.

“Right now we are in an 18-month window to deliver the building,” Kinter said. “Once we clear the preliminary design phase, we’ll move forward with the permits.”

Kinter said he expects to break ground on the building in six to seven months. Baskervill is the project’s architect. Kjellstrom & Lee is the general contractor.

Koch said his department hopes to be in the building by the end of the summer of 2014, in time for deer season.

Edwin Gaskin, head of economic development for Hanover County, said he sees the closing of the DGIF deal and the outlet mall property as a catalyst for growth in the area.

“It’s much better for the county,” Gaskin said. “In a way it bookends that stretch, with Bass Pro on one end and the outlet mall on the other. It will be interesting to see how it fills out in between.”

BizSense reported in February that the DGIF was planning to move ahead with the new building because its old headquarters at 4010 W. Broad St. needed more than $12 million in repairs.

Glad to hear that this finally got done. Great news for Hanover and for DGIF.

Even better for Bass Pro Shops and Greentop, nearby hunting, fishing and boating retailers.

The irony is that the buildings on Broad (that looks late 1960s) only need repairs becauses of the lack of maintenance. Good luck as in 20 years this site will be another blighting state office building.

I hope the state will at least surplus the Broad Street site so unlike the old Taxation building it does not sit vacant for a decade or two.

(Michael D. & 27161WGS)So the state should spend $12m to repair a 50yr. old building or build a new one for $10m? Ok first the GAIF should be where the public that uses its service goes. Next lack of maintenance? So that 1960 vehicle you owed where is that now? We will save alot money in lighting cost, heating and cooling with modern build materials and designs, with lower maintanence cost. As for existing buildings, see points 1&2. I am for not wasting money also, but the right things done here.

I’m with Michael D. the state has plenty of empty buildings littering the city of Richmond’s streets. It’d be nice if they stopped wasting our space & resources and used some of the empty spaces elsewhere.

What happened to the State saving all this money by putting the new DGIF headquarters on the old abandoned VDOT site they already own one-half mile away.

Jim obviously is new to Virginia. The old Putney shoe factory on Broad became the state taxation building in the late 1980s. Praised as modern and DGS said it would serve the state for YEARS. Well by the mid-1990s they were leasing space and moving out as they building was not being maintained. Rats, leaks, bugs, you name it. Thank GOD Brad Sauers and team bought it. I am NOT opposed to the new headquarters but as 27161WGS points out they don’t maintain, leave, and then demo by neglect. Murphy Hotel (8th Street Office bldg) is a good exampe of… Read more »