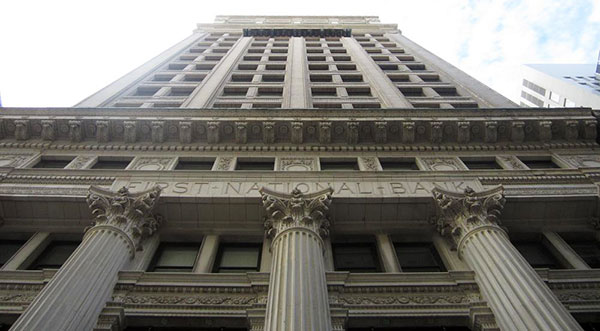 Take it to the bank: One of downtown’s biggest apartment rehab projects is complete. 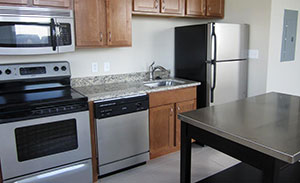 Inside one of the 154 apartments.

Construction on the 153,000-square-foot building ended last month and took just under a year.

Andrew Chisholm of property management firm Drucker & Falk said 55 of the apartments have been leased. The units are leasing from about $900 to upward of $3,000, Chisholm said.

The ground-floor commercial space – once the bank’s lobby – is currently the leasing office, but that could change in the future.

“Once we get things up and moving, the owners want to lease it out, and we’ll move into another space,” Chisholm said.

Northern Virginia-based Rushmark Properties, the building’s owner and developer, purchased the building in 2000 for $9.45 million. The developers are pursuing historic tax credits on the project.

The lender on the project is Bank of America.

The building, which had sat vacant since 2010 when BB&T moved to Riverfront Plaza, has some competition in the downtown apartment scene.

The 238-unit Residences at the John Marshall on Fifth Street opened in late 2011 after a massive renovation.

This is a spectacular building and I’m looking forward to seeing the apartments they’ve created. Its so wonderful to see these architectural giants convert to living space downtown. The apartment market is creating a Richmond Renaissance.

We have rented several apartments in this beautifully renovated building. The apartments are well appointed and the management is top notch. It’s nice to have quality options for downtown living. Our guest that have moved into our furnished apartments at First National love the location, the parking and the leasing team. Great job Drucker and Falk!

I hope downtown continues to succeed, it’s good for the whole area.