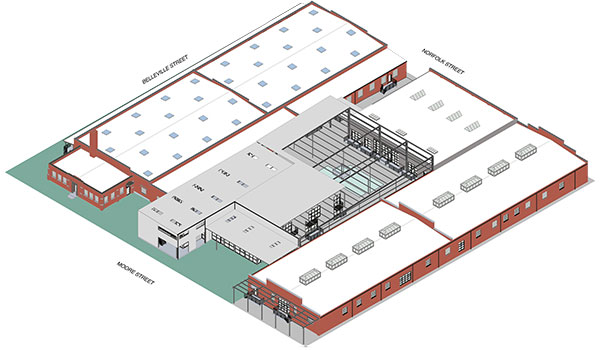 A rendering of the planned Moore Street Apartments. (Courtesy of Walter Parks Architect)

The complex, which once churned out items such as burlap sacks, includes three structures and will cost about $10 million to renovate. Monument Construction is the general contractor. Walter Parks is the architect. 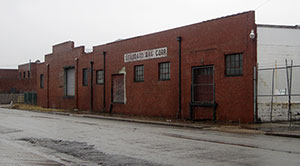 The factory complex at Moore and Belleville streets. (Photo by David Larter)

Peters said the development would compete with other projects in Scott’s Addition, which has seen no shortage of apartment rehab projects in recent years.

“We think it’s competitive with the Coca-Cola plant,” Peters said, referring to a 193-unit, $25 million project nearby. “It’s going to be a high-end product with a swimming pool, exercise facilities and other amenities.”

The one-story development will be known as the Monroe Street Apartments and is being financed through RED Capital Group, a lender that specializes in multifamily projects. The developers are also seeking HUD-guaranteed financing.

Monroe Street will have 79 one-bedroom and 15 two-bedroom apartments. All apartments in the 81,000-square-foot project with have exterior windows, Peters said.

The property is being used as warehouse space for month-to-month tenants arranged by building owner Jim Edge. It hasn’t been used to produce bags since 2008, Peters said.

Peters, who also developed the Gotham Condominiums at 13th and Main streets, said he hopes to get the development underway by August.

Peters will have plenty of competition for potential tenants: Scott’s Addition has about 1,000 units either under construction or in the works.

In addition to the Coca-Cola plant project and among more than a half-dozen other projects, Louis Salomonsky is planning 102 apartments at the intersection of Norfolk Street and Summit Avenue. Tom Wilkinson is planning 130 apartments at 3200 W. Clay St.

Peters is betting that there will be enough demand in Scott’s Addition for his project even after all those units come on the market.

“It’s obviously a risk,” he said. “One of two [outcomes] will evolve. One is that there really is too much product, and it will dilute the market. The other is that all the new product will define a new market and enable a new residential ecosystem. Obviously, we’re counting on the latter.”

Developer David Gammino, owner of City & Guilds, has developed 55 apartments in the neighborhood and said Scott’s Addition should fill up its new developments because they are less expensive than offerings in such areas as Shockoe Bottom.

“The projects that are in the pipeline now have larger units and a price-per-square-foot less than downtown,” Gammino said. “The [Scott’s Addition] units are going to be nice, and the bottom line is they are going to be more affordable.”

Great news for Scotts Addition and the City!

Sounds like Jerry Peters is going to create a “win-win” situation…… the neighborhood will see an empty building re-purposed into upscale residential and the city will likely increase its tax base. What’s not to like?

Great project. And yeah, I think supply will drive demand. With more apartments, There will be more restaurants and more amenities, Classic virtuous loop.

Also much as I support Shockoe bottom, I think people will prefer an urban environment which is close to the museum district and the fan. The area is already like a jug of gasoline and all it needs is a spark, it’s not the usual gentrification situation where crime is an issue – you are a reasonable walk to monument avenue etc etc.

If the whole foods comes in, I really see this area blowing up.

I lived in Scott’s Addition for the last year and really enjoyed myself. The local diners, the entertainment, the new Redskins training facility. I expect a flourishing community within the next 3-5 years. In my opinion, the best location in town!