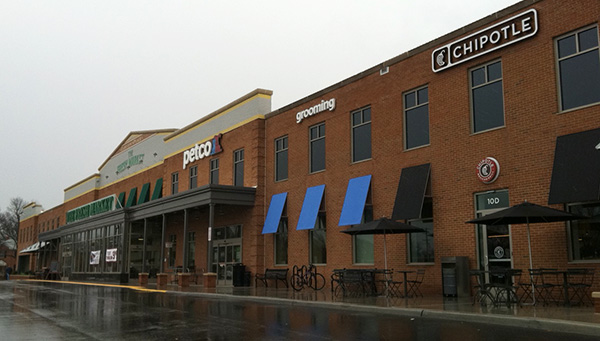 A once controversial Carytown development has found its final tenant.

Hand & Stone, a New Jersey-based massage and spa franchise, signed a lease to fill the last vacancy at Carytown Place. It will join Petco, Chipotle, Panera and the shopping center’s anchor tenant, the Fresh Market.

Connie Jordan Nielsen, a broker with Cushman & Wakefield | Thalhimer, handled the leasing on the 42,000-square-foot shopping center on Nansemond Avenue between Ellwood and Floyd avenues.

Andrew Elsbury, who owns the Hand & Stone franchise, said the newly renovated property and the demographics of Carytown attracted him to the location.

“It fits the image that I want to convey to my clients,” Elsbury said.

Construction for his 2,200-square-foot location is set to begin this month, and Elsbury said he’s shooting for a Mother’s Day opening. He said he’s considering adding a second floor to the space.

Elsbury also has plans to launch a Hand & Stone storefront in Midlothian later this year. He’s investing about $450,000 to open the two locations. He’s self-financing the expansion.

Hand & Stone’s first Richmond location opened in the Corner at Short Pump development in 2012. Elsbury does not own that franchise.

Carytown Place developer Maryland Financial Realty took some heat when it announced plans to convert the former Verizon building into a shopping center that would be anchored by a big grocery chain. A local merchants group, led by neighboring grocer Ellwood Thompson’s owner Rick Hood, launched the “Don’t Big Box Carytown” campaign in opposition to the project.

As a resident of The Museum District, I find the development to be first class all the way, with top of the line tenants and management. Its been a big boost to the neighborhood and brought none of the negatives predicted by the naysayers during the rezoning process. The developer deserves a round of applause. And in response to the competition, Elwood Thompsons has picked up its game too. Its been a win-win for the Museum District.

Absolutely, I agree with Bruce 100%. It has completely transformed the space and yet maintained every essential element of the fan and museum district. The controversy had nothing to do with anything other than sheer competition.

Not really sure what we’re applauding the developer for, there’s no programming there that wasn’t already abundant in the neighborhood. At the end of the day it’s another sub-urban strip mall with corporate tenants extracting money from the community and sending it to New Jersey. What “essential element of the Fan” that is I’m not sure.

Too bad Fresh Market doesn’t take SNAP benefits. I will never patronize them until they do.

Shouldn’t you try to use your SNAP [food stamps to us old folks] where you can get the MOST VALUE for your dollar? Fresh Market is a great store but it is expensive.

You should thank the people who shop at Fresh Market, Whole Foods, and the like because they are the very ones who fund (through income taxes) the benefits of your SNAP cards and other “free” money sources.

I agree with Bruce as well, and also live reasonably close. I’d like to get a whole foods – Ellwood Thompson’s really needs the competition

Bruce is exactly right. And this is now my favorite place to buy wine, snacks, and a quick bite anywhere in the city limits. It is easy to park and convenient to run in and out with two young kids. The location is perfect. The project is a stellar example of urban reuse and is a revenue generator for the city.