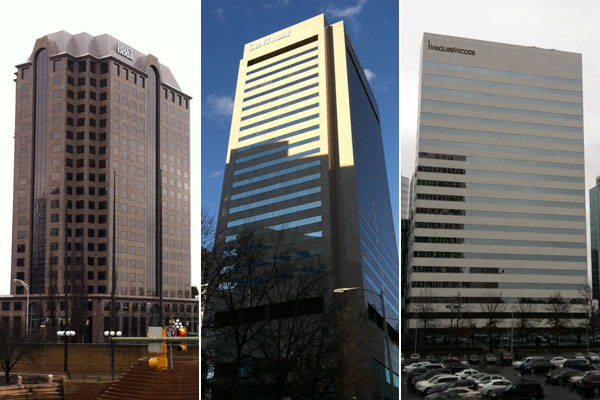 Three downtown firms that together lease more than 600,000 square feet of office space are coming to the end of their leases in the next 36 months, and their next moves could change the face of commercial office space in the city.

According to half a dozen office brokers and landlords, McGuireWoods, Hunton & Williams and LeClairRyan will all decide this year whether they will renew their leases, move, downsize or build something new.

Other downtown firms are already on the move.

And on June 30, more than 100,000 square feet of space in Riverfront Plaza’s west tower will become available when a lease by the former Wachovia Securities expires. The firm moved out of Richmond in 2007, leaving almost 200,000 square feet in the tower vacant. Parts of it were leased to other companies, including BB&T.

According to CBRE broker Will Bradley, more than 1 million square feet of office space will be up for renewal between now and 2015. In the worst-case scenario – everyone moves to the suburbs – vacancy could spike as high as 30 percent in Richmond’s core business district, he said.

Brokers unanimously said it’s unlikely that all the major office tenant’s shopping around for future space would pack up for such places as Innsbrook. But brokers and landlords foresee declining rental rates and a scramble to fill space. Rent for Class A office space downtown hangs around $18 per square foot per year.

“If you are a tenant looking for Class A office space, the opportunity to upgrade at lower prices is a real possibility,” said Charlie Polk, head of Jones Lang LaSalle’s Richmond office. “Rates are going to go down, and landlords are going to have to offer some concessions. Without question, by any standard, it’s going to be a tenants market by this summer.”

According to several sources with close knowledge of the discussions, McGuireWoods is considering building a tower on a parcel of land between the Dominion building at Eighth and Cary streets and the firm’s current building at James Center.

“If McGuireWoods decides to vacate, it would create a lot of competition in a market where there isn’t much velocity,” Clarkson said. “If they move forward and build their building, it will be a big-time tenants market.”

“Because it’s brand-new construction, the developer has to recover the direct cost of the building,” he said. “Once it matures, rents can go up or down depending on the market. In fact, over the past 20 years, the cost of rents haven’t really changed that much. But the cost of construction and land has skyrocketed, and that’s going to be reflected in the rent.”

The lease negations come at a time when many businesses, big law firms in particular, are looking to lower their overhead.

Gary LeClair, co-founder and chairman of LeClairRyan, said some law firms are bloated and are still in lavish, pre-recession offices.

“In our peer group, the average firm spends about $40,000 per year on rent per lawyer,” LeClair said. “That number probably needs to be in the range of $10,000 per year per layer. Lawyers can’t pass on the cost of palaces on to their clients.”

LeClair said that lawyers needed to come to grips with a changed and less lucrative legal landscape, and that that should inform how they make real estate decisions going forward.

Related news: First-floor retail space gets off the ground in downtown Richmond

It would be great if all three of them could join in and build Richmonds signature building.

^^ I soooo agree Mark! That would be great for RVA. Our downtown is so bland. I think it would be good to put a chain restaurant in downtown such as a Hooters, O’ Charley’s or Famous Dave’s. That way so many other retail stores and restaurants would follow, making downtown much more lively. Right now, downtown Richmond is a place you go to conduct business during the day and party at clubs/bars at night. You should be able to play/hangout during the day too.

That would not be great. It would leave a ton of space empty downtown which is not good for anyone. Also, there are a few chains downtown, Buffalo Wild Wings is probably the big one. There are tons of great new places downtown and a thriving arts community that is far from bland. Get out and do some exploring because you are obviously missing some things. We don’t need chain restaurants or stores. It’s not necessary for success. There is lots more to come this year.

Apparently Brett doesn’t know where downtown is as BW3s isn’t donwtown, it’s in the Slip. Also, apparently he doesn’t understand how commercial real estate works. Leaving office space empty downtown is great for downtown. It fosters cheaper rents that can compete with the likes of area business meccas like Innsbrook. I’m sure plenty of business would love to have an office downtown (closer to other large businesses, the airport, capitol, train station, etc.), but can’t for lack of a budget. Last but certainly not least, “downtown” (i.e. the bank district), in and of itself, is EXTREMELY bland and for work… Read more »

Thank you Corey. While chains are not NECESSARY for success. They certainly are helpful. The brand recognition will make consumers come and then if local retailers or restaurants surround them, they will reap the benefit of a chain being there. There will be consumer confidence to purchase in that area.

Also I agree that “There is lots more to come this year.” I have seen a lot of change happening around Richmond in general, but still a ways to go. Hey, you gotta start from somewhere.

So now the slip is not considered downtown Richmond? If you are talking about just the financial district then yes I agree. Hopefully the glory of Grace St will soon return. Also, you will never convince me that empty anything is great for anyone. Sure it might create a buyer’s market but at what cost? If there aren’t enough businesses to fill them, it won’t matter. Might I remind you that we are talking about EMPTY storefronts. How’s that working out?

Also, I would like to point to Charlottesville as an example. Beautiful pedestrian area downtown that is thriving with very limited chain establishments and most of those are the smaller kind, not big ones. Actually the only one that really comes to mind is Urban Outfitters. Sorry, know we are getting away from the original empty office space part of the discussion here.