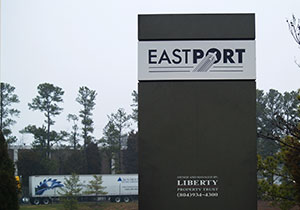 Best Bully Sticks is moving to an industrial park near Richmond International Airport.

For the second time in two years, a Richmond-based pet product company is moving to a larger space.

Best Bully Sticks – one of the fastest growing small businesses in the country according to Inc. Magazine’s annual list – on Wednesday signed a lease on a 90,000-square-foot warehouse near Richmond International Airport.

That’s about four times the size of its current warehouse at 1221 Admiral St. near Virginia Union University.

“Our current facility isn’t optimal for our needs,” said Best Bully Sticks founder Avrum Elmakis. “We really need high ceilings throughout, and the new building has that.”

That warehouse has a billboard on top that is visible from Interstate 95.

Best Bully Sticks manufactures dog treats, including a dog treat called the Bully Stick, and it distributes other pet products.

“We are planning on adding 15 to 20 jobs per year for the foreseeable future,” he said.

Best Bully sells treats and other pet supplies to customers from its websites and also sells to pet stores.

“We’ve seen tremendous growth in both areas of the business,” Elmakis said.

Elmakis said the company should move into the new warehouse, at 5701 Eastport Blvd., in March.

Elmakis said the fate of the Admiral Street space is unclear.

“We’re going to try and sell it,” he said. “And if we can’t do that, we’re thinking about converting it into student apartments. With its proximity to Virginia Union, we think that would be a good option.”

Elmakis said he would team up with a developer for that project if it comes to fruition.

As for the new building, owner Liberty Property Trust is getting ready to retrofit the property for Best Bully Sticks.

“They are going to be updating offices, upgrading the bathrooms and parking,” Elmakis said. “There is a lot to do between now and March.”

Elmakis credits his company’s growth with a change in consumer tastes.

“I think there is a transformation underway where people are choosing more all-natural foods for themselves and there is transference to their dogs,” he said. “I would put our business in the same sphere as a Whole Foods.”

Social media has also played a big part in getting his brand out to the market.

“We are approaching 50,000 likes on Facebook,” he said. “I think that’s a huge vote of confidence from our customers, and it’s increasing awareness.”