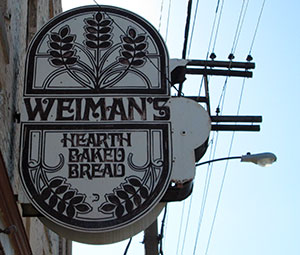 Morton Weiman knows his way around a bakery.

In particular, he knows a thing or two about the bakery in Shockoe Bottom that bears his family’s name and that his parents started 1945.

With health issues forcing him to retire and unable to find a buyer for the 70-year-old business, Weiman said he had to make the tough call to shut down Weiman’s Bakery. Its last day of production at 17th and Grace streets was Friday. Its final deliveries were Saturday.

“We enjoy doing what we’re doing. It was a very difficult decision to say we’re closing,” said Weiman, who took over the business from his father in the early 1980s. “But unfortunately I have no choice.”

Weiman’s mother and father started the business as a retail bakery. They sold to Richmond grocers and expanded the company to several retail locations in the 1950s.

From an early age, Weiman was part of the business, where the day’s first batches began heating up at 4 a.m.

“When I’d come home from school, I’d go to the bakery and put rolls on pans — anything I could do,” he said. “I didn’t go to college. I went to the university of 17th Street. That’s where I got my education.”

As Weiman recalls, they eventually found that the best profits came from selling to hotels, restaurants and food service companies.

“We then concentrated on restaurants, and that’s where we found our niche,” he said.

The bakery’s decision to close has left some of those restaurant customers scrambling for a new wholesale source of breads.

Crystal Morris, who runs Street Deli RVA, a deli cart at 10th and Byrd streets, said Weiman’s was her go-to source for all her sandwich bread, from wheat to marble rye to Kaiser rolls.

“I’m frantically looking for a new baker,” Morris said. “I tried to order 35 loaves of bread just to stockpile it and put it in the freezer.”

Weiman’s at its peak had as many 35 employees, Weiman said. Through automation, it was down to about 25 in its final years.

Realizing he would have to retire, Weiman said he shopped the company around for two years, advertising it for sale in bakery trade journals. He had a few nibbles, but none of the deals stuck.

“It’s a hands-on operation,” Weiman said. “You can’t have absentee ownership or management.”

Weiman’s son, Allan, who also grew into the family business, ran the company with his father until the last days. He’ll look to move on in his career, perhaps in a different industry.

With the ovens finally cooling down and the smell of fresh bread absent from air for the first time in seven decades, there’s also the matter of what to do with the bakery’s Shockoe Bottom property.

The 9,000-square-foot bakery at 127 N. 17th St. sits on about half an acre in a section of the Bottom full of large swaths of vacant lots. The Weiman’s property was most recently assessed at $500,000, according to city records.

“We haven’t made a decision on the real estate,” Weiman said. “We just need some time to relax and rest our brains. The best thing for me to do is stop and smell the roses.”

You would think that someone would try to make a go of it. i guess no one wants to have bakers hours?

Maybe it’s too grand of a scale for people to take on. There are certainly those who enjoy baker’s hours. Church Hill has three new bakeries that have opened just in the last six months. I encourage everyone to come visit them. Good luck to the Weiman family in their future endeavors.

Doesn’t Bottom’s Up use Weiman’s for their crusts?! Or have they switched to another baker already? I hope this won’t affect my beloved Richmond pizza. What a shame to see another legendary local business close!

Best hot dog rolls and rye bread that I have ever eaten. You will be missed. Good luck to the Weiman Family.