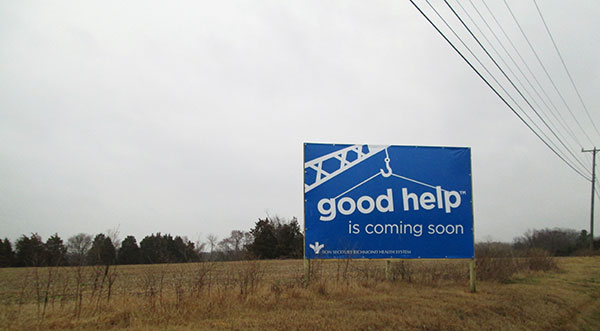 “The sign sort of speaks for itself,” developer Bob Atack says. (Photo by David Larter)

A veteran Richmond developer is close to landing a big-name tenant for his planned medical office park and mixed-use project west of Short Pump.

Bon Secours is in talks with Bob Atack to anchor the 70-acre development near the Goochland/Henrico County border. The nonprofit health system put a sign on the property this week announcing that “good help is coming soon” – “good help” being the translation of “Bon Secours” and catchphrase used in its current marketing.

“We have a confidentiality agreement with them,” Atack said. “The sign sort of speaks for itself. We are cautiously optimistic this deal with Bon Secours will work out.”

BizSense reported in May that Atack was in talks with a medical tenant for the property. At the time, Atack Properties senior project manager Rick Melchor said the development would be similar in scale to the 100,000-square-foot St. Francis Watkins Centre, a medical office development near the intersection of Highway 288 and Midlothian Turnpike.

Melchor said in May that the site work would run about $10 million.

Jim Theobald, an attorney with Hirschler Fleischer who represents Atack’s development, said landing the medical office tenant and the multifamily component are the two big hurdles to clear before breaking ground.

“The roads and pedestrian access are a significant expense, and you need some users to really drive that,” he said.

Once the users have been lined up, the next step is to submit plans of development to the county, Theobald said.

Bon Secours, which boasts $3.3 billion in assets, has been spreading its money around town.

In November, it announced a 60,000-square-foot medical pavilion in Midlothian as part of the St. Francis Medical Center near the intersection of Charter Colony Parkway and Old Hundred Road in Midlothian.

In October, the hospital system got into a $7.4 million deal with the City of Richmond for the naming rights on the Washington Redskins summer training camp project on Leigh Street.

And on Monday, the Richmond City Council approved a Bon Secours plan for a $4 million, 11,500-square-foot hospitality house near its St. Mary’s hospital campus on Libbie Avenue.

I suppose that Bon Secours will funnel all of the money it’s saving on the below-market Westhampton School lease out into the Henrico suburbs for this new development. Bon Secours wins, City taxpayers and schoolchildren lose.

Taxpayers are losing right now on a moth-balled building with no tax revenue or lease income being recognized.

This has nothing to with the article, but the comments. Yeah the larger point is that the City has a ton of surplus/mothballed real estate that needs to be put to use/ or sold. I suspect most of it is full of old junk furniture/paper/ trash that will never be used. I wonder who’s responsibility it is to deal with it. Economic Development? The beautiful old stone building in Scott’s addition always comes to mind as such a waste…….