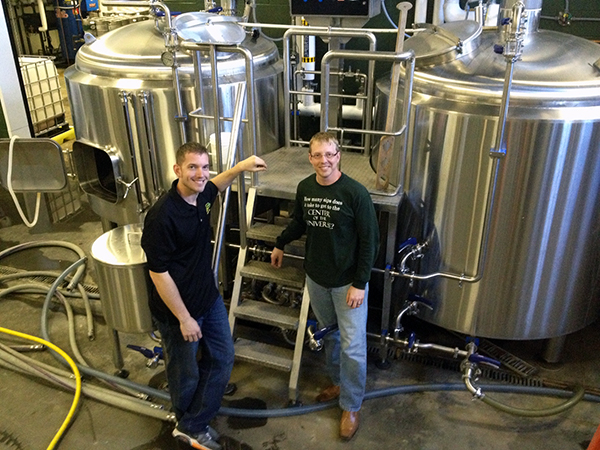 Growing up as one of four sons in the Graves family, I experienced almost every facet of what it means for boys to be boys, including the occasional scuffle.

Nothing says brotherly love like being punched and pinned to the ground.

My dad had a fail-safe method of dealing with those situations. The combatants had to kiss on the cheek, literally, and make up. Hot tempers cooled quickly; in fact, we invariably ended up laughing.

Chris and Phil Ray cracked up as well when I told them that story. As brothers who grew up in Tampa, Fla., they know the rough-and-tumble side of familial affection, too.

“He used to put his knees on my arms and slap my face around, which was awesome,” Chris said with a smirk. “But then I was always the little one, so as soon as I hit the front door I’d turn the waterworks on.”

Now the brothers have a different bond. Their passion for brewing good beer led them to establish Center of the Universe Brewing Co., an Ashland operation that is quickly developing a reputation for excellent beer and a convivial tasting room.

Like many brewers, the Rays and the Shiffletts started as home brewers.

“Everybody kind of had this idea when they were home brewing: ‘Wouldn’t it be cool to do this full time?’” says Adam Shifflett. While stationed in Hampton Roads in the Navy, he volunteered at O’Connor Brewing Co. in Norfolk and honed his brewing chops.

The dream of going pro turned serious when he left the service and the brothers, who grew up just outside Harrisonburg, assessed their skills. Tyler, 23, was a biology major specializing in microbiology (think yeast); Jason, 27, was a business major with sales experience (think marketing); Adam, 30, was a submarine officer with a background in engineering (think mechanics).

Though they have niches, “We all do everything,” Adam says. “I generally will formulate the recipes, but as far as the actual brewing goes, we all brew, we all do sales, we all work the tasting room.”

The Rays also have their individual strengths. Phil, 35, has a master’s degree in mechanical engineering and worked for Honeywell in Florida before moving to Virginia. Chris, 31, recently retired as a Major League Baseball pitcher – he was a member of the 2010 World Series champion San Francisco Giants. He wears the creative cap in the partnership.

Although Mike Killelea, formerly of Legend Brewing Co., now heads up the brewing at COTU, the Ray brothers still do pilot batches. They developed some of COTU’s beers – Ray Ray’s Pale Ale and Pocahoptas IPA, for example – while trading recipes across the country.

Chris’s stints in San Francisco and later in Seattle with the Mariners convinced him that the Richmond area was ripe for another craft brewery. “In Seattle, there’s a hundred breweries in a 100-mile radius,” he said.

The “local is good” philosophy has served the Rays well. The Ashland area, where Chris lives with his wife, Alice (a Hanover native), and newborn son, has been supportive.

“Every single day, literally, five or six people will come up to us and thank us for opening,” Phil says.

So, what’s it like doing business as brothers? Any scuffles? Arm-wrestling?

Chris: “We haven’t had any big disagreements. We disagree on some stuff, but if we feel strongly about different categories of the business, we just concede on some stuff.”

Phil: “If I don’t share his opinion but he makes a convincing enough argument, then OK.”

Is it a strength being brothers, as opposed to independent businessmen?

Chris: “Yes – it’s the stake we both have in the company. Plus we have to be together, because we’re going to have to see each other after work.”

Phil: “And it’s trust. Even the decisions I typically make, if I’m gone for a week, I have no doubt that Chris is still looking out for the business. And it’s definitely more fun working with family. It brings a different element of pride in success. … We’re building something together.”

Chris: “I think even our family, our extended family, shows that same sense of pride, even though they’re not working directly with the brewery. I think the fact that it’s a family business holds some weight with everybody.”

Speaking of family, is that young son of Chris’s in line for a spot in the beer business?

Chris grins. “He [Mike Killelea] already knows that in 18 years he’s out of a job.”

The brothers bust out laughing, and Phil chimes in, “Mike’s just keeping the seat warm.”