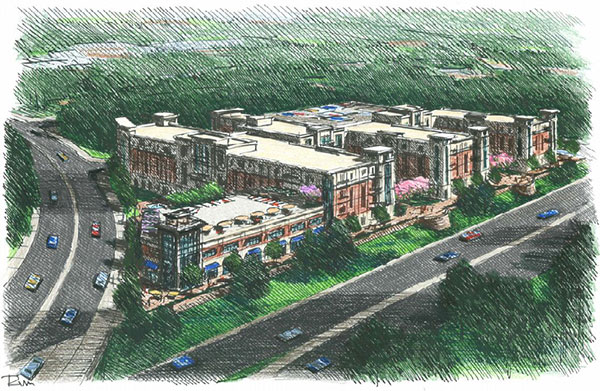 A rendering of the planned Manchester on the James. (Images courtesy of Cassidy Turley)

Without even getting out of the ground, a stalled apartment project in Manchester might soon have its third owner.

The proposed 200-unit Manchester on the James and its vacant 2.28-acre site next to the Lee Bridge are back on the market less than two years after being sold to a North Carolina developer. 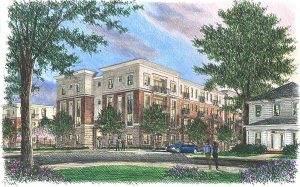 Northwood Raven is trying to sell the property and the city-approved plans through the Washington-based firm Cassidy Turley. The project is at the intersection of Riverside Drive and Cowardin Avenue.

William Harvey, an analyst with Cassidy Turley, said the plans for the project would come with the land. The firm expects the parcel and plans to go for about $3 million, he said.

“The drawings are about 30 to 40 percent completed, so someone would just need to come in and finish it up,” he said. “But they’ve done all the sample layouts, sample floors and sample units, and that would convey with the opportunity.”

The project was originally conceived by Crosland, which also developed Rutland Commons in Mechanicsville. Former Crosland principal David Ravin then purchased the property in the summer 2011 for $1 million under a new entity when the project stalled.

Ravin, who is the head of Northwood Ravin, did not return a call for comment by press time.

The city approved the lot for an apartment project in a 2008. The plan includes permission for a 179,215-square-foot building with 200 apartments and a 300-space parking garage.

The property is next to a planned 50-unit low-income apartment project by Atlanta-based Bridgeland Development. The Belle Summit Apartments will be about 72,000 square feet and cost almost $9 million.

PLEASE get this project underway already. That area is such an eyesore. Also, I wish the Springhill Neighborhood Association would stop complaining and be happy someone wants to develop the area and make the houses (equity) in the area more desireable. The Belle Summit apartments were suppose to break ground in December but it hasnt. What’s going on? Build build build! It seems like other development is happening so close to this area but not quite tackling this area head on.

I agree. That area, which I live very near, is indeed a total eyesore. Really hope this project becomes a reality someday….

Blame the developers. We were offered an opportunity to shape the development into a better project, but the greedy business types, the City and even our own Councilperson would not consider any of our ideas. When it was all said an done, the developer has not even applied for a permit. If you lived in our neighborhood you would understand. We are not against development, we encourage responsible development that is managed properly.

Belle Summit is moving thru the city process as quickly as they will allow it to happen. They bought the land in December.

I live down the road and I dont want more traffic in my neighborhoods or my parks. and why would anyone think low income housing would be good for their neighborhood a developer from atlanta sure doesnt care its not in his backyard

Don’t want more traffic in your park? Sounds like you should move out of the city and into a rural area. While I agree they shouldn’t be low income apartments, the land needs to be developed nonetheless.

I too am offended by this “eyesore” the grass meadow and wooded lot are the scourge of the earth and must be removed. Not sure “Joe” and “Shelly” know what they are talking about. Maybe they are from atlanta…or should be named “Pat” or “Jeff”; either works. Editor note: Last names please…if they exist. On another note a site should inform what is placed on it. This site affords the best views of the river and downtown. Manchester on the James, is a fat, suburban blob. Not responding to what the site, or neighborhood has to offer…it simply takes. Belle… Read more »

Greedy business types. What a joke people that use terms like that are. You own a house in a neighborhood so you think you should be allowed to tell others what they can do with their land. Can imagine why they wouldn’t want to use your ideas. You people are as bad as the idiots in the suburbs trying to control everything around you.

Wrong in caps… nice touch…Again? what? Anyway, I certainly don’t believe numbers from the Central Virginia Apartment Association. They have no skin in the game. Somewhere in between may be more accurate. No one mentioned anything about view spoilage. My argument is these sites should have a better built, designed and thoughtful building. Perhpas be a highrise as was accepted by the neighborhood from the first developer.

Jason you are WRONG again. Richmond has a vacancy rate around 6.5%. Richmond is not the 5th most vacancy city that Census Data was incorrect. Please read attached link above. I know these apartments spoil your view of the city but did you expect them to stay vacant for ever?

Why even put apartments next to the river if they aren’t tall enough to enjoy the view? The Links at Manchester can’t even see over the Manchester Bridge. This one will also need to be tall, at least as high as River Tower(s).

Well put Mars. My, and the neighborhoods point. Mr. Jones missed that. If you notice in the renderings, for both this project, and Belle Summit have nothing but small double hung windows to “enjoy” the view (what you can see of it). This is what Gregory is refering to by “greedy business types”. Too cheap to provide a sliding door, bigger windows, or some thought to simply respond to what the site offers. Joe, i dont think the neighborhood is telling the developer what to do, The view is an asset the site affords, you are stupid not to take… Read more »