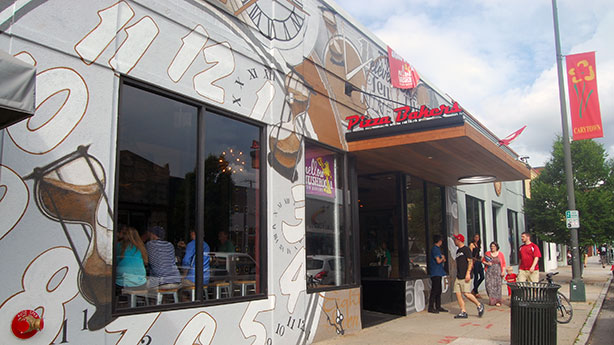 Mellow Mushroom, a pizza franchise based in Atlanta, this week opened its first Richmond location at 3012 W. Cary St.

The restaurant has been in the works since last year, and the company invested more than $1 million in the building.

The location used to house Plan 9 Music, which moved across the street to a smaller space. Some of the restaurant’s vinyl-themed decor is a nod to Plan 9, according to a report in the Richmond Times-Dispatch.

The menu features more than a dozen specialty pizzas, including the Gourmet White and the Holy Shiitake Pie.

The company has about 150 restaurants nationwide.

Ate at the Mellow Mushroom in Bristol, VA a few weeks ago. I told the waitress that they should come to Richmond! The atmosphere, food and prices are awesome!! My family and I will definitely be dining there.

So excited!! I used to eat at the Mellow Mushroom near Emory University over 30 yrs ago!!! Good stuff!