A planned Jackson Ward gelato shop has run into the usual hiccups that come with launching a business, including delays and higher-than-expected costs. 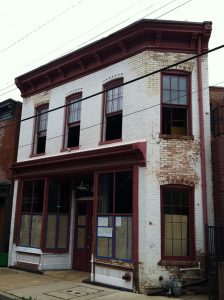 And then there’s the ghost.

Owner Bryce Given and his mother, Barbara, are renovating the space at 405 Brook Road, where they plan to open Lucy’s Gelato Cafe.

The Chesterfield resident said he’s gutting the 4,600-square-foot, two-story building himself. Delays with the city, architect and building engineer have stalled the project.

And twice during the renovation, Given, 51, said he’s seen a ghost in the building.

The first encounter came late one night, when Given, a carpenter by trade, was sitting at a table near the front of the building. While facing the rear of the shop, he says, he saw a fuzzy white image in shape of a person staring at him. It repeatedly came up the stairs and went back down. Then it disappeared.

“The first time I saw it, I was checking all the street lights and car lights’ reflections and ruled all that out,” he said. “It was just too bizarre.”

Given said that he hadn’t heard the building was haunted when he bought it in 2011 but that neighborhood gossip filled him in.

Legend has it that in the 1930s the owner of a horse depot committed suicide at the property because the rise of automobiles had doomed his business, Given said. Since then, the building has been rumored to be haunted.

Luckily, he seems to be on the ghost’s good side.

“I haven’t seen him in a few months, so I think he approves of the renovations I’m doing,” Givens said jokingly.

Lucy’s will occupy about 1,000 square feet of commercial space on the first floor of the building, which sits near Brook and Marshall streets. The second floor will become a 2,000-square-foot apartment, Given said.

He would not share how much he has spent on renovations.

More than $90,000 worth of building permits have been filed with the city for the address since December 2011.

“I could have torn this building down and built a new building for less than I’ve spent on this thing. But they don’t make buildings from 1910 anymore,” he said. “It’s been a real struggle. The price of things is staggering. It’s mind-blowing.”

The gelato will be made in house, Given said, and the eatery will serve soup, sandwiches and other baked goods. There will also be vegetarian, vegan and gluten-free options.

Given said he does not have a target date for the shop’s opening, but he’s hoping residents from the nearby Ram Cat Alley Apartments and Richmond Dairy Apartments will boost business.

“I wish I would have gotten into Jackson Ward earlier,” he said. “There’s a lot going on there now.”

Jackson Ward is home to a growing restaurant scene. In the past year alone, Estes BarB’Que, Max’s Tavern and Saison have all moved in to the neighborhood.

No ghost sightings have been reported at any of those storefronts.

Tell the City you are part of the Resdskins’ economic development plan. That might speed things along.

What is the true history behind the property? Are there records to say who owned it previously and what events occurred there whether it be natural deaths or someone taking their own life? That could lend to the validity of the claims.

Kat, Good question, it could be interesting to do the research and find the exact details. Brook (rte 1) used to be the main route into Richmond and this place is half a block from the Emerick Flats, formerly a car dealership. The horse depot would have been a premium location for supplying feed and accessories for all the horses delivering milk from the Curles Neck Dairy on Marshall street and many other horses as well It is hard to imagine how devastating it would have been to have made such an expensive bet on horse technology in 1930 at… Read more »