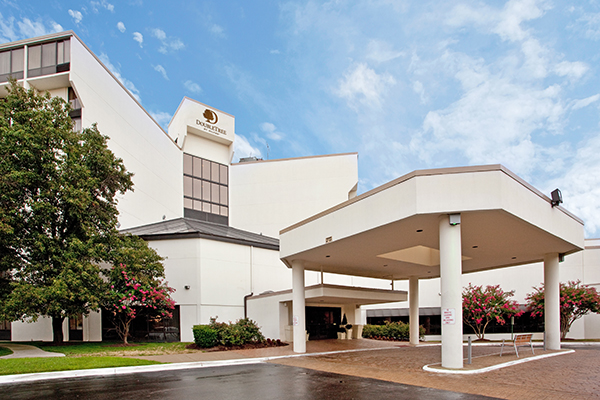 The new look for the hotel at at 1021 Koger Center Blvd. (Courtesy of Doubletree by Hilton)

One of Richmond’s largest hotel owners is adding another property to its collection.

The deal is set to be finalized July 1, at which time the property will be rebranded as a Doubletree by Hilton hotel.

Shamin is buying the 237-room hotel from Midlothian Hotel Associates.

Neither party would disclose the purchase price. The 5.3-acre property was most recently assessed at $13.1 million, according to Chesterfield County records.

Shamin owns 36 hotels in three states, including 27 across Richmond.

The hotel does a lot of event business thanks to its 26,000 square feet of event space.

Amin said multimillion-dollar renovations are planned for the property, largely to be done as business slows during the winter months. The company has interior designers and architects in house and plans to hire some subcontractors.

This is the latest in a string of deals for Shamin.

It is turning two shuttered car lots in Colonial Heights into medical offices and restaurants.

And last September it acquired the Aloft Hotel at West Broad Village for $13.5 million.

Vernon LaPrade, a longtime local developer and bank chairman, is managing general partner and one of the investors in Midlothian Hotel Associates.

The group acquired the hotel in the late 1980s.

LaPrade said that Shamin approached them late last year and that the group decided it was time for a deal.

“I’m 80 years old myself, and I’ve got a group of people who were wishing to sell it,” he said.

Mike Watkins, the longtime general manager of the hotel, will stay on after the deal closes, LaPrade said.

This property was developed by my grandfather Larry Sterling. Its still the tallest building in Chesterfield County and has the largest conference facilities in suburban Richmond. He was proud of this hotel all his life and how it spurred the development of this entire area in Chesterfield. He retained ownership, management and debt obligation till he passed away. Good luck to the new owners. Thanks Biz Sense.

Congratulations to Vernon on the sale of the Holiday Inn. I hope you can relax a little now. 🙂