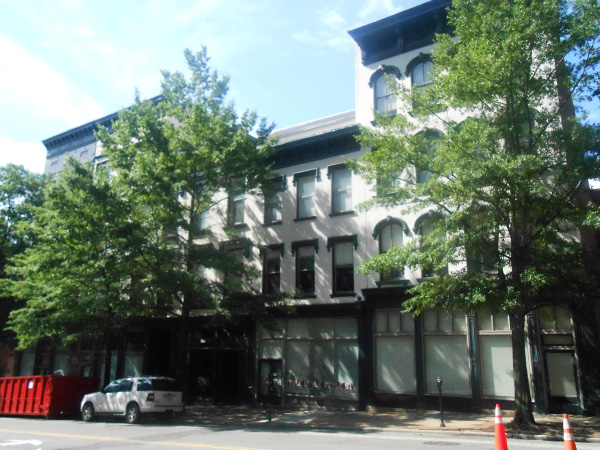 A Shockoe Slip office building is the latest downtown property to get the apartment conversion treatment.

Monument Construction, in a joint venture with Howard Kellman of the Edison Companies, plans to turn the 78,800-square-foot Exchange Place at 1313 E. Main St. into a 63-unit mixed-use apartment complex.

Monument purchased the four-story building this month through Duesenberg Properties LLC for $3.9 million, according to city records.

“It is a further example of the trend: the tough-to-lease office being converted to something other than office,” said Austin Newman, a Cushman & Wakefield | Thalhimer broker who represented the buyer. “It’s an office building that’s an old, not real leasable class C job, and it’s eligible for historic tax credits.”

The conversion will cost about $9 million, said Chris Johnson, principal at Monument Construction. The work will be financed by Union First Market Bank, as well as federal and state historic tax credits.

Plans call for mostly one-bedroom apartments and 30,000 square feet of commercial space, as well as an onsite gym and parking for residents. The one-bedroom units will average about 640 square feet with rents ranging from $969 to $1,149 per month.

C&F Finance will continue to hold office space on the building’s fourth floor. Johnson said that a bankruptcy attorney is moving in on the ground floor and that one 4,000-square-foot vacant commercial space remains at street level.

The conversion has begun, and Johnson said he plans to complete the project next spring. Monument is the project’s contractor, and Scott Fowler with Glen Allen-based Fowler Architecture is the architect.

This is the second development in the past year and a half that Monument and Kellman have teamed up for. Last year, they started a project to turn a 56,000-square-foot building at Main and Fourth streets into about 70 apartments.

Monument is also well-versed in Shockoe-area historic tax credit conversions. The firm bought 38,000 square feet at 1425 E. Cary St. three years ago and built a 38-unit, mixed-use apartment building. The company then moved its own offices into the building’s commercial portion.

Monument, along with Sensei development, is also behind Shockoe Valley Heights, a $29 million apartment and retail development in the block bounded by Main, Franklin, 20th and 21st streets. That project included two historic tax credit conversions at Bobber Flats and Engine Company Lofts.

The Exchange Place deal went under contract in December 2012 and closed July 11. The building had been on the market since March 2012. Thalhimer brokered both sides of the deal, with Suzanne White representing the seller and Newman representing the buyer.

Johnson said all of Monument’s projects in the Shockoe Bottom and Shockoe Slip area are above 95 percent occupancy.

“There just seems to be very positive momentum in Shockoe Slip and Shockoe Bottom,” he said.