A local branch of a long-struggling Virginia Beach bank will soon be up for grabs.

The Bon Air location of Gateway Bank & Trust closed for good July 12. In March, the bank announced that one of its four Richmond locations would be among seven branches to be closed. 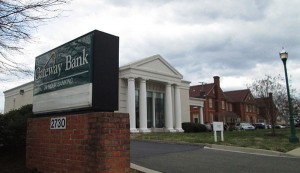 The property at 2730 Buford Road is a former Bank of Richmond location. That bank was acquired by Gateway in 2008. Gateway, which was headquartered in Virginia Beach at the time, was subsequently sold to Hampton Roads Bankshares as the economy and real estate market began to collapse.

Becky Hurst, a senior vice president in charge of the company’s real estate, said it plans to list the property for sale in the next month or so.

It hasn’t hired a broker for the listing.

“We’re trying to distinguish who is the best person to list it with,” Hurst said.

The Bon Air branch sits on 0.8 acres and was most recently assessed at $686,000, according to Chesterfield County records. It was built in the early 1960s by the former Citizens Bank of Chesterfield.

Hurst said that the company has already received some calls about the property but that no deal has been struck.

“We’re determining what the right price should be,” she said.

Others on the closure list include two branches in northeastern North Carolina, three in the Hampton Roads area and one on the Eastern Shore, where it runs the Shore Bank brand.

HRB previously sold one of its Gateway locations in Midlothian to McLean-based Sonabank.

The company has closed more than 20 branches across Virginia and North Carolina in the past two years. It had 58 branches at the end of 2010. It now has 33 locations.

The cost cutting measures were put in place to help the $2.03 billion bank return to profitability after huge losses from 2010 through last year. It returned to profitability in the first quarter.

Bank of Hampton Roads/Gateway controlled about $234 million in deposits in the Richmond market, or about 0.32 percent of the total market share, according to the most recent figures from the FDIC.