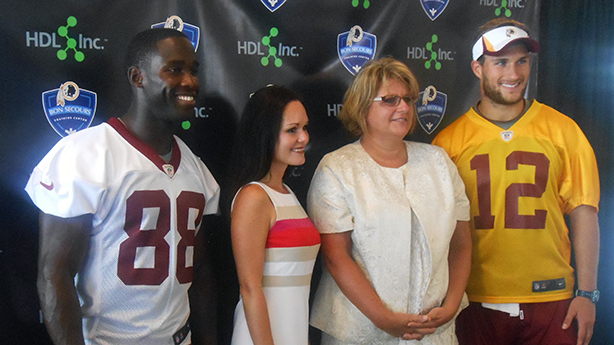 Health Diagnostic Laboratory struck a deal to be the new health and wellness provider for the Redskins. In exchange, the HDL name will get exposure on signs and banners at FedEx Field, the team’s home stadium, and at the team’s new facility in Richmond, formally known as the Bon Secours Washington Redskins Training Center.

“They’re a new team to the Richmond area, and we’re looking for new opportunities to promote health and wellness in Richmond and now in the nation,” HDL president and chief executive Tonya Mallory said of the new agreement.

The deal gives the fast-growing HDL a foot in the door of professional sports organizations.

Mallory said the company is interested in expanding its services within the NFL and to other major sports, although HDL is not in negotiations to sponsor any other teams.

As a part of the agreement, HDL made its cardiometabolic testing and clinical health consulting services available to the team’s players, coaches and staff.

The sponsorship was announced Tuesday at the team’s training camp facility, on which local nonprofit health-care company Bon Secours put its name with a $7.4 million sponsorship last year. The Redskins will break camp Friday, wrapping up the first in an eight-year commitment the team made to Richmond.

The deal marks the second time this year HDL put its stamp on the local sports scene. In March, the downtown-based firm announced a $4 million sponsorship of the VCU athletic department – the largest in the program’s history.

That deal put HDL’s name on all VCU athletic facilities, including the Siegel Center, Sports Backers Stadium and the Cary Street Gym, which become part of the HDL, Inc. Athletic Village.

The company, which has 715 employees, is building a $24 million, 100,000-square-foot addition to its headquarters in the Virginia Biotechnology Research Park.

I’d like to see HDL begin talks with the city of Richmond on a stadium/arena upgrade downtown. Clearly they have the energy, financial capacity and willingness to invest in sports organizations. Can we get the Flying Squirrels to sit down with these folks? ‘HDL Field’ has a nice sound to it…

I don’t think there was any ill intent in omitting the Kickers. The article mentions this is the second time this year that HDL has “put its stamp on” a local sports entity. That is absolutely correct, as the Kickers deal was prior to this year.