River’s Bend Golf Club hugs the banks of the James River in Chester.

With one of his golf courses already back in the hands of its lender, the owner of River’s Bend Golf Club is pushing to keep a grip on the scenic riverfront course in Chester.

Ronnie Kelley, who until a recent foreclosure also owned Prince George Golf Club, is seeking to have River’s Bend’s Chapter 11 bankruptcy case dismissed in order to work a potential deal for the 117-acre property to qualify for tax credits and ease the business’s debt load.

According to bankruptcy court records, Kelley through River’s Bend Golf Course LLC is trying to craft a plan that would allow him to own the property as a golf course while donating a conservation easement on the land. The property could then be eligible for tax credits that could be sold to get current with the course’s creditors.

“It takes care of all the creditors,” Kelley said. “It will still be used as a golf course – you just can’t develop it.”

River’s Bend has been working with Blue Line Conservation Incentives, a Northern Virginia firm that acts as middleman and market maker to connect property owners with conservation tax credit buyers.

A Nov. 18 court filing stated that the value of potential credits, should the conservation plan go through, could be in excess of $4 million.

Jay Norman, president and founder of Blue Line, said the idea is still in its early stages.

“At this point, it’s just a concept,” Norman said. “We have at their request put together a conservation finance plan which could, under certain circumstances, allow them to do the things they hope for the property with debt mitigation, etc.”

The question remains whether the bankruptcy court and the course’s creditors – particularly Chesterfield County – would agree with the plan’s potential. 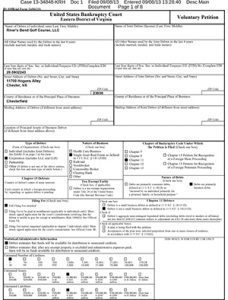 River’s Bend was put into Chapter 11 bankruptcy in September to avoid a court-ordered tax auction sought by the county. That followed years of unpaid real estate taxes on the course.

The county’s tax lien takes precedence over all other creditors, including the holder of the loan on the property, Amherst Lending LLC.

Norman said the county has not agreed to anything regarding the easement plan.

Bill Baldwin, an attorney with Marchant, Thorsen, Honey, Baldwin & Meyer representing Amherst, would not comment on the case.

Hugging the banks of the James River in Chester across from the Henricus Island historical site, River’s Bend has plenty going for it in terms of conservation, Norman said.

“The property that is subject to the bankruptcy has, at least in my opinion, significant conservation value both for scenic open space, historic importance and, of course, environmental importance,” he said.

Kelley’s plan would preserve the property, protecting it in perpetuity from future development. The property’s current zoning could allow for residential development.

River’s Bend argues that dismissal of its bankruptcy case is warranted as the financial burden that would be incurred to prepare a formal plan of reorganization doesn’t make economic sense.

A judge has not yet ruled on the motion to dismiss the case or whether the conservation plan would be acceptable.