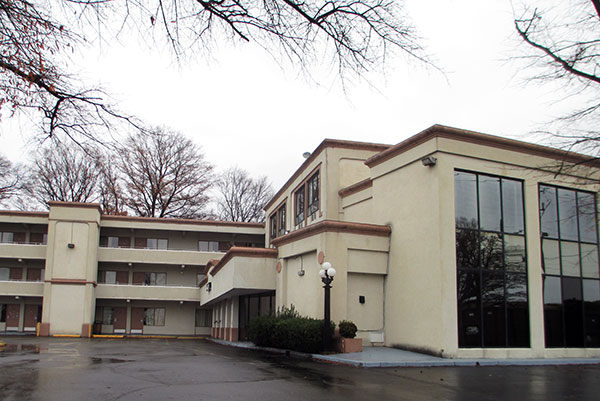 The 99-room Economy Inn near Interstate 95. (Photos by Burl Rolett)

A hotel across the street from the Diamond is headed for foreclosure as its owners work to stave off the auction.

The Economy Inn at the corner of Hermitage and Robin Hood roads is set to be sold at auction Dec. 30.

James Vora of the motel’s ownership group, Shree Arihant of Richmond Inc., said he is working with the property’s lender in hopes of avoiding foreclosure. Vora blamed a drop in business over the past few years for the default on the motel’s loan.

“The economy was down, plus what happened was they were working on [Interstate] 95 and shutting down the exits at night,” he said. 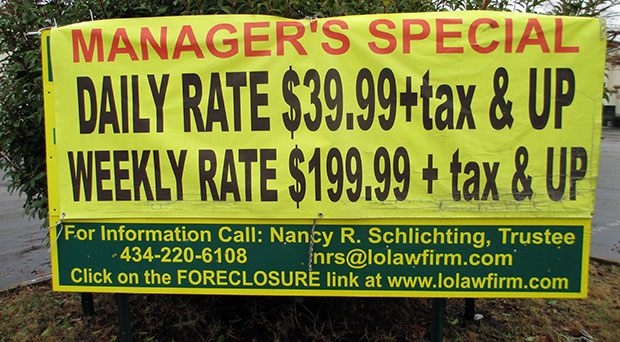 A “manager’s special” banner draped over the foreclosure sign.

If the property is auctioned as scheduled, it will be the second motel near the Diamond sold in recent months. The VCU Health System bought the Red Carpet Inn for $1.3 million in November. That property had been owned by Yunus Vohra, president of Shree Arihant of Richmond.

Plenty of eyes are on the Diamond and the surrounding acreage since Mayor Dwight Jones announced a plan to clear the 60-acre ballpark site for a potential mixed-use redevelopment. The proposal hinges on a new stadium in Shockoe Bottom.

The Economy Inn auction will take place on the steps of the Richmond Circuit Court. Nancy Schlichting, a Charlottesville-based attorney with law firm Lenhart Obenshain, is the foreclosure’s substitute trustee.