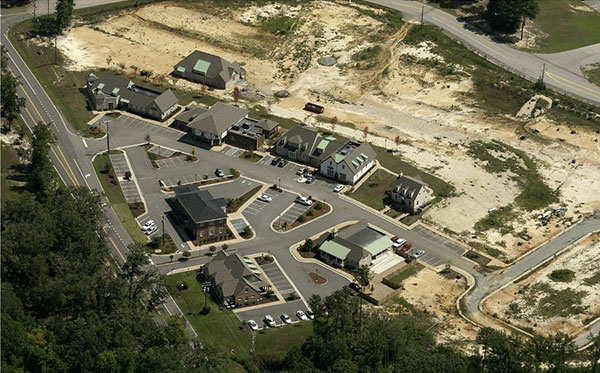 An aerial view of the Maidstone development. (Photo courtesy of Joyner Commercial)

A developer is jump-starting a stalled development with a $22 million plan.

“I think that John Crump had an admirable vision for the project, and I think he definitely wanted to leave a positive footprint on New Kent with this particular development,” Adamson said. “We’re putting a slight twist on what he initially had envisioned.”

The new plans call for about 50 single-family homes, down from the original 70 townhouses Crump had planned, and 50,000 square feet of commercial space on New Kent Highway. Joyner Commercial’s Jon Beckner, who brokered the Maidstone purchase on Adamson’s behalf, expects the development to cost about $22 million.

Adamson in November bought Maidstone’s residential section for $400,000 from Colonial Virginia Bank, which had foreclosed on the property. He expects to close the deal for the commercial component this year. Essex Bank is the seller of that section.

The residential development should take about three years to complete, but Adamson does not have a timeline for the commercial side of the project.

But New Kent Courthouse Village stalled when Crump ran out of money and was unable to find new financing. In September 2011, Essex Bank, one of the project’s three lenders, moved to foreclose on its portion of the development, a three-acre piece of commercial property within Maidstone.

Crump put the development in Chapter 11 bankruptcy protection to prevent the foreclosure but requested the bankruptcy be dismissed in January 2012 in hopes of working out a deal with creditors.

Crump told BizSense in 2012 that he had put about $9 million into building New Kent Courthouse Village. Today Maidstone has about 16,500 square feet of finished commercial space. Its tenants include an insurance agency, a dentist, a fitness center and a day care.

Maidstone’s residential portion never got out of the ground, but Beckner said the development won’t have to wait much longer.

Adamson is in talks with Virginia Beach-based J.F. Schoch Building Corp. to build the houses at Maidstone. Schoch will buy the individual lots before construction. The finished houses will cost between $195,000 and $235,000, and the sites are almost ready to build on, Beckner said.

“There’s basically infrastructure in place,” he said. “We will be starting at least two model homes to be built right away.”

Adamson is also behind Hanover Village LLC, which proposed building a 12-screen movie theater in Hanover County. The firm this month withdrew its application for a special-use permit for the project, although Adamson told the Times-Dispatch that he intends to pursue that development.

New Kent County’s economic development department has worked with Adamson throughout Maidstone’s zoning and building process but is not providing any development incentives. County administrator Rodney Hathaway said the long-awaited Maidstone development has been in the county’s plans since 2003.

“It was envisioned that this area would become a true village-type development, including the government facilities, Maidstone and a couple of other projects,” Hathaway said. “I think Maidstone really is a key part of that vision towards getting things started and really achieving that courthouse village.”