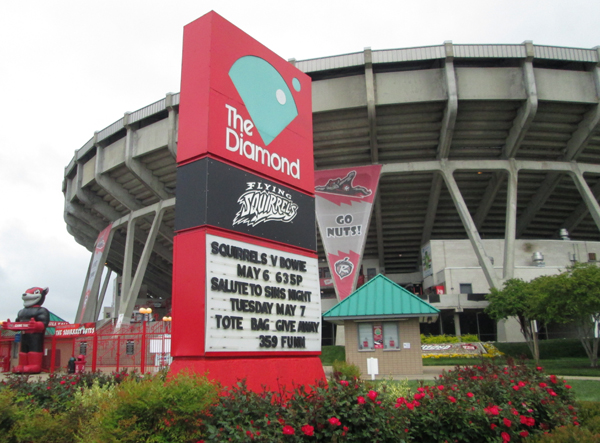 The city will be responsible for demolishing the Diamond if and when a new ballpark is built.

With a potential new baseball stadium on deck, the city has closed a deal for the Diamond.

The Richmond City Council on Jan. 13 voted to allow the city to acquire the aging baseball stadium from the Richmond Metropolitan Authority, a deal that could be a precursor to massive redevelopment on the Boulevard and a new ballpark.

The city will take ownership of the Diamond when the Flying Squirrels’ stadium-use agreement runs out at the end of 2014.

The move will give the city control of about 60 acres bounded by North Boulevard, Hermitage Road and Robin Hood Road that, if and when the Diamond is demolished as part of a plan proposed by Mayor Dwight Jones, could become the site of a new mixed-use development in the Diamond’s absence.

The acquisition was authorized in two separate ordinances, each approved by an 8-0 vote. The first accepted a release of easement from the RMA for parking lots surrounding the Diamond. The second gave the green light for the real estate transfer from the RMA to the city. Council member Chris Hilbert was not at Monday’s meeting. 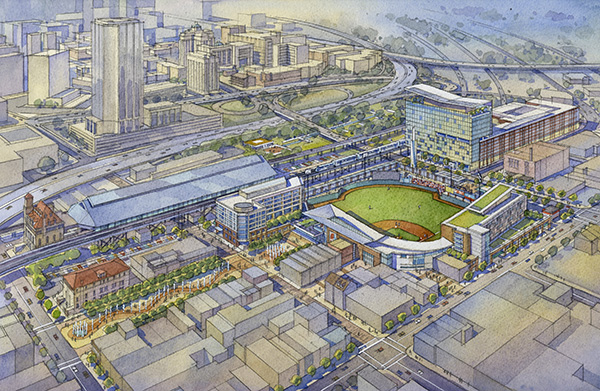 A rendering of the proposed development. (Courtesy of the City of Richmond)

In November, Jones rolled out a plan for a $200 million mixed-use development in Shockoe Bottom, centered on a new stadium for Richmond’s double-A Flying Squirrels baseball team. The plan includes a Kroger, a hotel, about 700 apartments units and a slavery museum site.

Jones’s plan, however, might depend on new tax dollars a redeveloped Boulevard would produce. The Richmond Times-Dispatch reported that about three-fourths of the city’s projected annual revenue from the ballpark plan would come from redevelopment at the Boulevard site.

About a dozen people spoke against the city’s acquisition of the nine-acre Diamond property. Most of them also voiced opposition to the Shockoe Bottom plan, arguing that the two issues were inseparably linked.

Three audience members spoke in support of the Diamond acquisition, although two of them said they also opposed a baseball stadium in Shockoe Bottom.

Since it was announced, Jones’s stadium plan has seen pushback from those who don’t want a development built near a 19th century hub of the slave trade.

Parker Agelasto was the only City Council member to speak in a brief council discussion following the citizen comment portion of the meeting. He said he worried that, when the city takes over the property at the end of the year, it will find a stadium that wasn’t properly maintained ahead of the transfer.

“I would be ultimately concerned that there would be a year’s worth of deferred maintenance,” he said. “I fear that we might be stuck with a property that does not have sufficient funds to maintain it.”

The RMA voted in December to transfer ownership of the Diamond back to the city at the end of 2014. The property will be transferred free of charge, although the city will be responsible for paying to demolish the Diamond, and any ballpark-related revenue left in the RMA’s coffers at the time of the transfer will be divided equally among the RMA members: the city, Henrico County and Chesterfield County.

The City of Richmond conferred the Diamond property to the RMA in 1984 and provided financing to build the stadium, with an understanding that control of the Boulevard site would revert back to the city if a new ballpark was built. 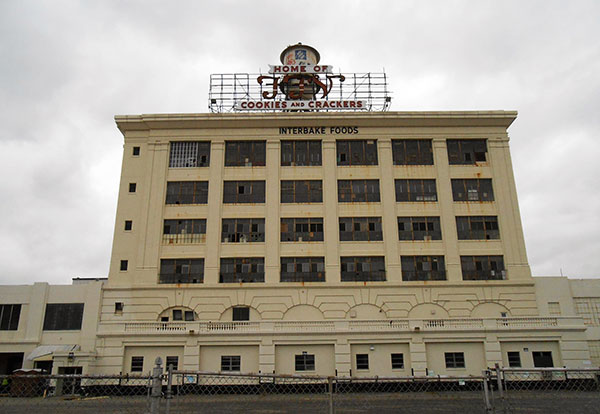 The Interbake factory at West Broad Street and Boulevard.

No specific plans have been released for Boulevard redevelopment, but, if the mayor’s plan goes through, interested developers should be easy to find.

Midlothian-based Rebkee, a development firm working on a $23 million conversion at the nearby Interbake cookie factory, in November expressed interest in working on other Boulevard projects.

Richard Johnson of the Wilton Companies pointed to recently developed big-box stores just east of Boulevard as evidence that the Diamond area can support large-scale retail.

“I think that area over there is ripe for retail development,” he said. “You can see where the Lowes and Kroger went out by the 1600 block of West Broad and how successful those buildings have been out there.”