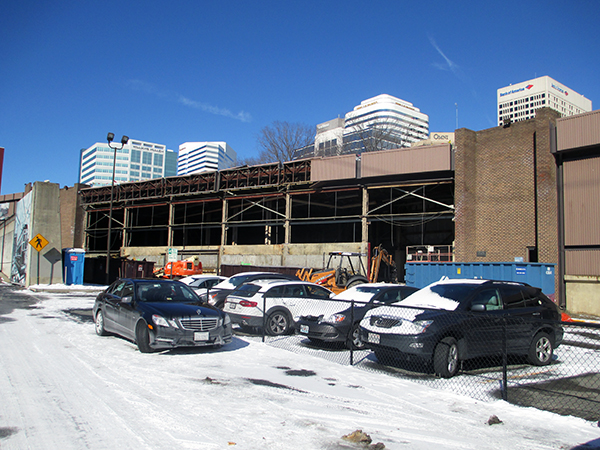 Work is underway for a fifth upscale apartment building at the Locks. (Photos by Burl Rolett)

A major downtown development is rolling into its next construction phase.

Fountainhead Development and WVS Companies are clearing the way for a fifth apartment building at the Locks, a more than $40 million mixed-use development on the Haxall Canal at the former Reynolds North plant.

The project, whose working title is Locks Building 5, is the first new construction job at the seven-acre complex that includes 174 apartments and the Casa Del Barco restaurant.

“We did the four historic buildings that were at Reynolds,” Fountain principal Tom Papa said. “The shell of this building already existed, but it will be basically taken down to the ground, and then there will be a new four-story structure.” 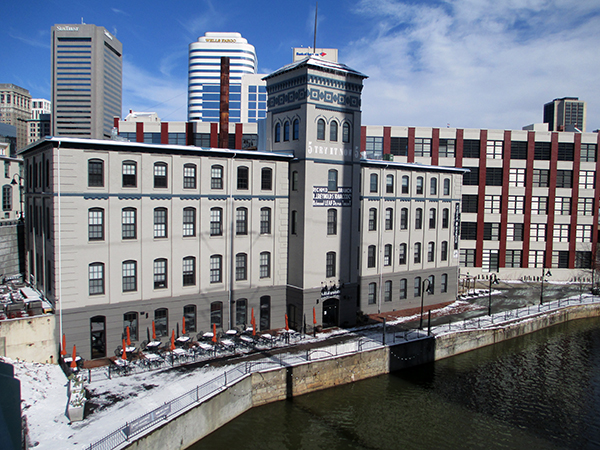 Locks Building 5 will replace part of an L-shaped warehouse just east of the corner of 12th and Byrd streets. Papa estimated that construction would cost about $11 million, bringing WVS and Fountainhead’s total investment in the Locks to almost $45 million.

The team bought the former metals plant in February 2012. All of its finished apartments are occupied, which WVS vice president Richard Souter said drove the team to get to work on 52 more units at Locks 5.

“Starting this fifth building is really a no-brainer,” he said. “As we saw the leasing was that strong, we wanted to get this one going as soon as possible.”

WVS and Fountainhead hope to finish the building this year. Walter Parks is the architect, and KBS is the general contractor. BB&T is providing financing.

Apartments at the Locks rent for between $1,200 and $1,800. Papa said that the team hasn’t nailed down final rent numbers for its latest apartment building but that prices would be commensurate with the going rate for higher-end units in the area.

“The amenities will be top shelf,” Papa said. “These will be very exclusive apartments. Everyone will have balconies, outdoor space overlooking the canal, and the upper units will have nice views of the river.”

Locks 5 will also have less variability among its units than the other buildings at the complex, Souter said, because the developers don’t have to work around the layout of an existing building.

“Some units were smaller and had smaller windows because we were dealing with a historic structure,” he said. “We have the freedom to lay this building out exactly as we want.”

The first residents moved into the rehabbed Locks buildings last January. The area also welcomed an F.W. Sullivan’s restaurant across the canal from the Locks on the ground floor of the Troutman Sanders building.

More demolition is the up next for development at the Locks. Papa said the team plans to “liberate the canal” by removing a larger section of the Locks 5 warehouse that spans the waterway.

Fountainhead and WVS will also eventually convey to the city the portion of the canal that cuts through the Locks, paving the way for a cooperative development effort laid out in the Richmond Riverfront Plan.

“The canal walk right now is part of the weak link in our canal trail,” Papa said. “There’s sort of this lockstep progression of improvement that will happen along the canal, and it will be a very vibrant canal.”

The Locks also has the potential to add to the downtown skyline: Plans call for a tower structure to take the place of a warehouse at 10th and Byrd streets, immediately east of Riverfront Plaza.

The warehouse is currently used for parking, and Souter said a use for a potential tower has not been determined.

This has turned out to be an outstanding project. Finally the turnaround of the Canal properties will be completed and Richmond will have a beautiful path from Belles Island to Shockoe Bottom. Congratulations to Fountainhead and WVS!

It’s great to see the continued progress and transformation of downtown Richmond. Smart development has shown that growth can be achieved while respecting historic structures and also adding creative architectural spaces. Over the next 10 years, Canal will be thoroughly transformed for both residents and tourists to enjoy.