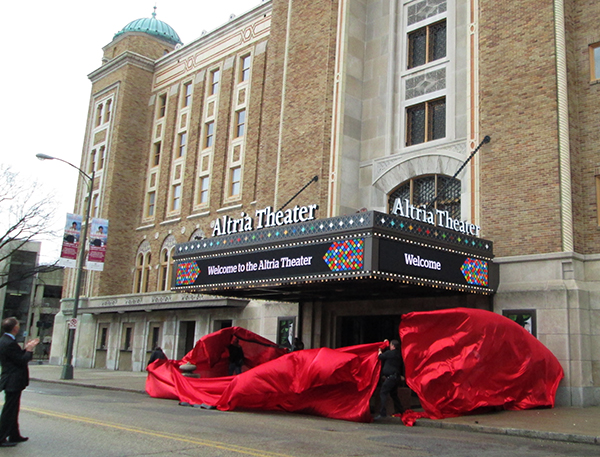 First it was the Mosque. Then the Landmark. Now it’s the Altria Theater.

The 85-year-old theater on North Laurel Street last week debuted its latest incarnation with a ceremony that included a huge red drape dropping to reveal a high-tech marquee emblazoned with the local tobacco giant’s name.

Featuring LED lights and Altria’s color scheme, the marquee is one of the more visible results of $10 million committed by Altria, the parent company of Philip Morris and one of Richmond’s richest corporations.

That money will go toward a $60 million renovation that is underway.

“Some parts of the renovation couldn’t wait, and this marquee is one of them,” said Steve Rogers, chairman of the CenterStage Foundation, which operates the theater.

Altria is the lead contributor in a $25 million fundraising campaign from private donors. Approximately $17.6 million had been raised as of last week’s event.

Other larger donations include $2 million from Dominion Resources, $1 million from local businessman and philanthropist Bill Gottwald and his Herndon Foundation, and $500,000 from the Mary Morton Parsons Foundation.

The City of Richmond, which owns the venue, has committed $14 million to the project. The city will also seek to recoup historic tax credits from the renovation. 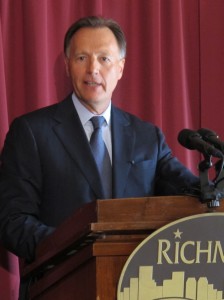 Richmond Mayor Dwight Jones and Altria chief executive Marty Barrington were on hand for the unveiling.

Rogers said the renovation is on schedule and within budget. It is expected to be complete this year.

The marquee was designed by Chester-based Holiday Signs. Holiday won the contract in a bidding process through the project’s general contractor, Gilbane.

The marquee is a modern shell that was built on the structural steel of the theater’s original marquee.

The LED display was made in South Dakota and shipped to and assembled at Holiday’s facility in Chester. Fabrication began in January and was completed a few days before the unveiling.

“Everything went without a hitch,” Twedt said.

The company is building a second marquee that will eventually go on the theater’s Main Street entrance.

Holiday Signs’ work around town includes the large-mouth bass signage that marks the entrance at the Bass Pro Shops in Ashland, the ornate entrance sign at Reynolds Crossing in Henrico County and the illuminated roof-mounted sign on the John Marshall building.

Calling it “The Mosque” as original built is bad according to the PC crowd, but naming it after a company whose products kill its customers is good????

The Landmark Theater was built around the time of the Great Depression by a group of Richmond Freemasons. It was never built to be an actual “Mosque”. Orig cost to build was over $1M. The building went into foreclosure eventually (post depression) and the City of Richmond purchased it for $200,000. Just a little history lesson.

Hey Michael. It was nice meeting you at the Altria Theater unveiling. Thanks so much for interviewing Allen for your article. We certainly appreciate the exposure.
Mark Hackley
Holiday Signs