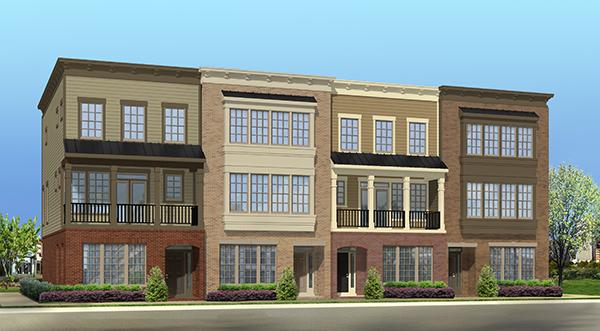 A rendering of the townhouses planned for Rockett’s Landing. (Courtesy of HHHunt)

A new round of construction is coming ashore at a local riverfront development.

HHHunt is breaking ground on the first wave of new townhouses at Rocketts Landing. The company plans to build up to 82 townhouses over the next couple of years at the mixed-use development that straddles the line between the City of Richmond and Henrico County.

HHHunt hopes to begin work on the first building – with four attached townhouses – next week. One townhouse will be used as a model home, and the other three are spoken for, said Lisa Khoury, a sales executive with the builder.

Reservations have been put down on three of the five units in the second building, which should come under construction in about a month.

“People are looking for the lifestyle of living in Rocketts Landing and being close to the city and all it has to offer and all of the historical parts of Rocketts Landing,” Khoury said.

The townhouses begin in the upper $270,000s and come with two different floor plans, each with a two-car garage, she said.

HHHunt general manager Patrick McCarthy said that, with the upgrades most people are choosing, the townhouses are averaging about $330,000. Bank of America is financing the construction of the houses, McCarthy said.

Richard Souter, a partner in Rocketts Landing developer the WVS Companies, said there’s a lot more in the works at development. Only 12 of its 50 acres have been developed. Its current occupants include condo buildings, restaurants, and a recently completed office redevelopment for a local law firm.

WVS is waiting on a final approval to start building a 156-unit apartment complex.

Souter said he would love to bring aboard a small grocery store and a boutique hotel. They’re also talking to restaurateurs for more dining options on the waterfront.

“The vision is going to be shaped by the market at any given time,” Souter said.

Rocketts Landing lost one of its restaurant tenants in recent weeks when M Bistro called it quits at 4821 Old Main St.

It’s nice to see the continued development, but I have to say the architecture is a little disappointing. I understand wanting to reference some of the older, vernacular architecture of the area (and Richmond) but honestly it looks like something you might find in Short Pump or Glen Allen. When you’re trying to reference (or in this case, mimic) historic architecture (particularly architecture that is fairly iconic of the city it’s in), you have to get it *really* right or not try at all. Something like the Art District Hyattville by EYA (http://www.eya.com/Arts_District_Hyattsville) would have worked better, I think. Something… Read more »

“The vision is going to be shaped by the market at any given time,” Souter said.

Translation- we have no plan and we’re desperate for money, so if you want to buy something, we’ll sell it to you even if it doesn’t fit with a long term plan, since we don’t have a long term plan in first place.

I find the negativity directed towards what appears to be an attractive product, before it has even been built, to be fascinating and suspiciously like resent or envy…ugly words lacking in credibility or merit.

I assume your comment was partially aimed at me. I can assure you that “resent or envy” have nothing to do with it. As a development, I do like Rockett’s Landing. To borrow the marketing phrase from another nearby development, it’s (so far) “180 degrees from Short Pump.” In fact, when I was house hunting, I considered a place in Rockett’s Landing but instead chose an older home in one of Richmond’s great neighborhoods. I’d just really hate to see this go down the road of Short Pump with cheap, watered down “historicist” architecture. It has everything to do with… Read more »

I am not sure they considered the impact of architecture when they built the two large condo buildings. The modern “Rock” condo looks cool and the old warehouse has a nice vibe but the others are large brick buildings. I would like to see more options visually for 82 townhomes….with two choices. But it seems like a very nice place to live.