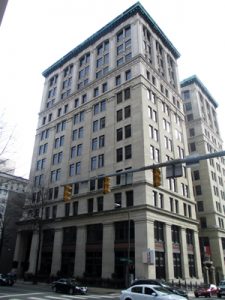 A local hotel giant is checking into a second downtown office building.

The Chester-based hotel operator agreed to pay $3.27 million in a deal that will close next month. The seller was Parmenter Realty Partners, the Florida-based firm that also owns the 25-story SunTrust Center on the same block.

Shamin doesn’t yet have a firm plan for the 134,000-square-foot building that sits just blocks from its two-hotel renovation project at 700 E. Main St.

“Obviously it was close to our 700 Main project, so that was part of the appeal,” Amin said. “We have a couple of different options, we haven’t really decided on anything yet.”

In at least its sixth acquisition since the beginning of last year, Shamin was the highest bidder on the Mutual Building in an auction that ran from March 10 to March 12. The company will likely pay cash for the 13-story building, Amin said. It will take over ownership April 11.

Shamin is one of the dominant operators in the local hotel market. It owns and runs 27 hotels in the region between Ashland and Petersburg. Shamin’s downtown holdings already include the Holiday Inn Express at 201 E. Cary St. and 18-story former office tower at 700 E. Main St. that will be converted into a two-in-one Hampton Inn and Suites and Homewood Suites. Its flagship Richmond-area hotel is a 254-room Hilton Short Pump.

Shamin has also dabbled in in the works at former car dealerships in Colonial Heights. The company’s plans for the Mutual Building could mark another step away from its bread and butter.

“A hotel is something that is less likely than keeping it office or making apartments,” Amin said.

Shamin has spent more than $55 million in the last 15 months buying up hotels and properties between the Richmond and Hampton Roads areas. The company is also expanding its holdings in Northern Virginia with a plan to build a second dual-concept Home2 Suites and a Hilton Garden Inn in Herndon.

At the lower end of its property holdings, Shamin is letting its Comfort Inn at 5240 Airport Square Lane go to foreclosure later this month. The company said the struggling 17-year-old hotel no longer fits into its portfolio.

The Mutual Building keeps its name from the Mutual Assurance Society of Virginia, the insurance company that had it built between 1904 and 1905. Mutual Assurance operated out of the building for 86 years before moving to the West End in 1991.

The property is about 33 percent leased. The Christian & Barton law firm is the building’s largest tenant and fills the top four floors. The building and the land it sits on are currently assessed at $8.5 million.

Cushman & Wakefield | Thalhimer broker Eric Robison handled the sale on Parmenter’s behalf. He’s been shopping the building around for about a year and said putting it to auction was appealing because it guaranteed the sale would close once a buyer signed on.

Robison showed the building to local, regional and international suitors, adding that a potential buyer from as far away from China had a look.

“The price was the market price at the end of the day,” Robison said. “That’s the best thing about these auctions is they take all of the strengths and challenges in the property and let the market determine what the final price will be.”

Plans for the property were about as varied as its potential buyers and the Mutual Building’s wide range of uses was one of its major draws, Robison said.

“The buyer is very well respected and a proven entity in our market, and the building has an awesome history; it’s one of downtown’s iconic buildings.” he said. “I think it will be neat to watch that building transform.”

Ok, what is missing here? Why is a building like this have to be sold at auction and why did it only go for $3.3m? And what is the buyer going to do with the building?

So what are we all missing? Last week there was an artical that Shamin was letting the comfort inn airport go into foreclosure because they didn’t build it right with an elevator and a pool. That isn’t the banks problem. I find it deplorable that the company has $55 million to put into new hotels and buildings, but they will screw over the bank and let another hotel go into foreclosure, leaveing the bank holding the lose. Is this responsible business? I saw this happen years back with the comfort suites inns brook too. The hotel went to auction and… Read more »