While searching for a way to step back from the day-to-day, the owner of a local biotech firm found his answer on the Southside.

ImmunoTox founder and chief executive Kimber White didn’t disclose the terms of the deal, but he was clear on his motivation for selling.

“Basically, it was about time for me to retire and I looked around to see if anyone was interested in purchasing the company.”

White, 63, founded the company 28 years ago to specialize in the fields of immunotoxicology and immunopharmacology. The research examines the immune system’s response to drugs, chemicals and other contaminants used in society and their side effects. ImmunoTox does these studies for private industry.

“Silicone breast-implant materials, detergents – you name it and we studied it,” White said.

After he retired from his faculty position at VCU in 2012, White realized it was time to change his role at ImmunoTox. As part of the deal, White will stay on as a part-time consultant to AIBioTech.

“That meets my needs and gets me out of the house and still gives me time to go fishing and hunting… all those things you’re supposed to do when you retire,” White said.

For AIBiotech, a contract research company that does lab work for pharmaceutical companies, the government and private sector, the deal helps it expand into a new avenue of potential revenue.

“One of the areas that we needed to upgrade and expand is this growing field of immunopharmacology,” said Robert Harris, AIBioTech’s president and chief scientific officer. 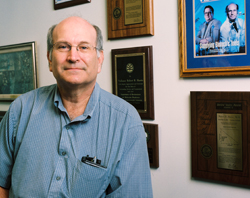 In its new ImmunoTox division, AIBiotech takes on a small firm with a handful of employees and lab facilities at the Biotech Park at 800 E. Leigh St.

But Harris sees bigger things in the future.

He predicts AIBiotech can get the ImmunoTox operations up to $7 million to $10 million a year in revenue within the next three years.

AIBiotech, which is co-owned by local lab industry veteran David Bostwick, will put some money into upgrading ImmunoTox’s operations at the Biotech Park. It will eventually move the new division out to its building at 601 Biotech Drive in North Chesterfield.

AIBiotech owns that 32,000 square-foot facility and is looking to add an additional 20,000 square feet of space in the area, Harris said.

Running clinical diagnostics, DNA testing, drug development testing and commercial contract lab research, AIBioTech has grown to 155 employees. Its predecessor was founded as part of the former Commonwealth Biotechnologies, a local firm that was broken up through bankruptcy in recent years. AIBioTech was acquired by Innsbrook-based Bostwick Laboratories in 2009 and spun off as a separate company in 2011.

Harris would not say how much revenue the firm generates presently.

“We’re in a pretty dynamic growth phase, let’s just leave it at that,” he said.