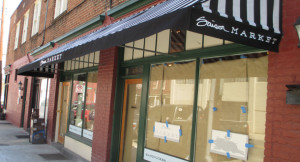 The storefront for Saison Market at 23 W. Marshall St.

Restaurateurs Jay Bayer and Adam Hall are set in April to open Saison Market next door to their Jackson Ward restaurant, Saison, on the corner of West Marshall and North Adams streets.

Bayer and Hall signed a three-year lease for the rest of the space in the 2,000-square-foot first floor of 23 W. Marshall St. It was once home to Jackson Ward Deli before it closed in 2008 and more recently, a catering business used it for storage.

When the space became available in February 2013, the landlord approached Bayer and Hall to give them the first shot.

“We saw too much of an opportunity with the space to not jump on it,” Bayer said. “Being able to turn over inventory and being able to assist with cash flow makes sense.”

The restaurant owners have about $25,000 budgeted for the extension, which they are funding mostly on their own.

“We’re trying to take the Saison idea and make it available in a market setting,” Bayer said. “We won’t have any pasta. But if you need an onion and some ginger we got you covered.”

Their idea is the latest in a string of neighborhood market/café concepts to pop up around the city in recent months. Harvest Grocery and Union Market are open in the Fan and Church Hill, respectively. And Scott’s Addition will soon get an Urban Farmhouse that will put emphasis on the market side of its business.

The timing of the market’s launch also comes as a pending influx of new residents looms for the downtown area surrounding Jackson Ward. More than 200 apartments are going into the nearby Central National Bank Building.

Bayer said he hopes the market can be a neighborhood meet-up spot, and to that end will have between 16 and 20 seats available. Sandwiches and salads will be sold for around $8 to $10. Draft beers will cost between $4 and $8.

In addition to prepared foods, made-to-order foods will be available for breakfast, lunch and dinner.

Bayer said he sees some overarching similarities between Saison Market and other niche grocery stores cropping up around town, but that each spot should have its own character.

“I think it’s important that each market fills the need of that neighborhood,” Bayer said. “Each one should be different.”