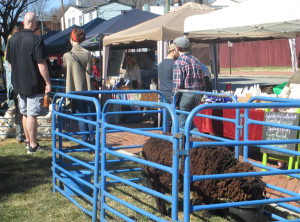 A Richmond farmers market company is growing its business in Church Hill.

Founder Karen Atkinson said the weekly Chimborazo Park event will be similar to GrowRVA’s popular South of the James Market with a vendor mix of about 80 percent local food producers and 20 percent artists.

Atkinson hopes to have between 20 and 30 venders signed on for the June 7 inaugural Chimborazo Farmers Market. It will be the second new market GrowRVA has launched in the past three summers, after adding a weekly market in Midlothian ahead of the 2012 season.

“There has really been a shift in a segment of the population locally about wanting to buy local and wanting to know where their food is coming from,” Atkinson said.

The Chimborazo Park Farmers Market took shape over the past year after Councilwoman Cynthia Newbille reached out to GrowRVA to add a market to Church Hill. GrowRVA spokesman Doug Grisevich said Newbille has been the driving force behind opening the market at Chimborazo Park, which sits at the middle of the 7th District that she represents.

“She has been a crusader in making this happen,” Grisevich said.

GrowRVA’s business is centered on arranging outdoor local food markets, then charging vendors a fee to set up at the event. Vendors pay a one-time application and advertising fee, and then a $20 to $30 per event premium to set up shop at GrowRVA markets.

GrowRVA made its first move into Church Hill two weeks ago by putting on a pop-up minimarket for the grand opening of the new Urban Farmhouse Market and Café at the corner of 33rd and Marshall streets.

Urban Farmhouse owner Kathleen Richardson announced last week that GrowRVA will continue to throw a popup market at her Church Hill location on the fourth Friday of every month. Her store’s minimarket was a test run of sorts for the planned Chimborazo Park Farmers Market.

“What we did was just sort of a precursor to what’s to come, and we have always from the beginning wanted to support the farmers market at Chimborazo Park,” Richardson said.