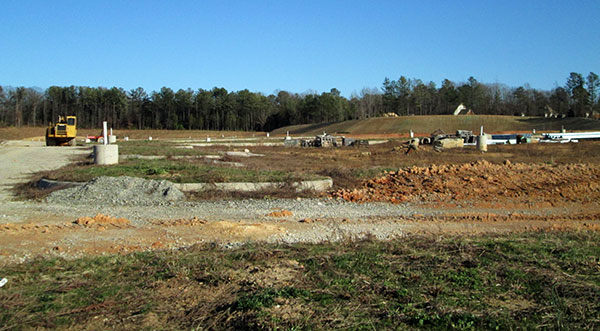 The lot at Walmart Way and Midlothian Turnpike where Stonehenge Village Center is planned. (Photo by Michael Schwartz)

After nearly 20 years in the works, a planned Chesterfield development finally has its linchpin.

New York-based Wegmans will anchor Stonehenge Village, a 37-acre shopping center just west of Chesterfield Towne Center. The deal, announced Wednesday along with plans for another Wegmans in Short Pump, marks the first lease signed for Stonehenge Village since it was initially approved back in the mid-1990s.

Marchetti said he hopes to break ground next year. He declined to provide an estimate of how much Stonehenge Village would cost to develop and said only that Wegmans will build its own store.

“We’ve been in discussions with Wegmans for a few years now, and just late last year they basically started talking to us again about coming here,” he said. “It’s a high-end store that will complement the rest of the tenants that we are talking to right now.”

Another sign of life at Stonehenge Village reared up late last year when restaurant chain Cheddar’s filed plans to build its first Richmond location at one of the shopping center’s planned outparcels.

Connie Jordan Nielsen, a Cushman & Wakefield | Thalhimer broker who is handling leasing at the shopping center, said Wednesday that Cheddar’s is still a go.

Marchetti Properties, which also developed the new Kroger-anchored Staples Mill Marketplace, has been working on Stonehenge Village since 1995, Marchetti said. The developer applied to have the property rezoned in the mid-1990s and succeeded, earning a zoning change that required a mix of commercial and office development but capped the amount of space any one retailer could take up.

Last year, that previous ordinance was amended in a rezoning case that allowed more commercial development and removed the single-retailer size limit. That allowed Marchetti Properties to reel in the type of massive tenant Stonehenge Village has landed, though it still needs final site approval from the county.

The push to bring Wegmans to Stonehenge has also been years in the making, Nielsen said. 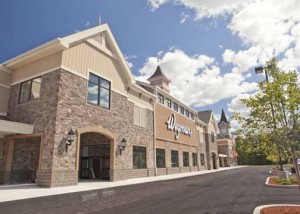 “When the market went down we lost all of our tenants,” Nielsen said of prospective tenants that had been looking at Stonehenge. “We were working on the Wegmans deal four years ago, and they decided not to come into the market. Now they’ve decided now is the time to come.”

Stonehenge isn’t the only local development that successfully courted Wegmans. The grocer is joining outdoors superstore Cabela’s at the planned West Broad Marketplace, a 60-acre project that will sit just west of Short Pump Town Center between West Broad Street and Interstate 64.

Developer NVRetail is under contract to buy the 60 acres.

“The best way to explain this is: You’ve got probably the top two retailers that this market could possibly capture on that site,” said Thalhimer broker Mark Douglas, who with Nielsen is working leasing at West Broad Marketplace.

“We’ve been interested in the Richmond market for a while now, but it was just a question of finding the right site,” Natale said. “In this case, we were able to find two great sites.”

The Wegmans stores will be the chain’s first two in Richmond. The grocer currently has six stores in Virginia, with its Fredericksburg location as the nearest to Richmond. A Charlottesville location is also in the works.