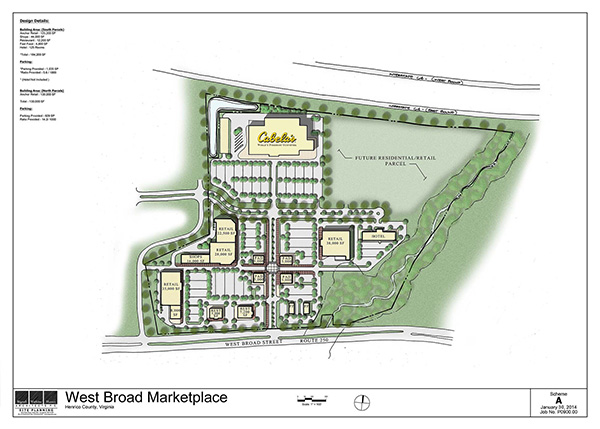 Click the image for a PDF of the site plan. (Courtesy of Cushman & Wakefield | Thalhimer)

A hunting and fishing retail giant has its crosshairs set on Short Pump.

A new Cabela’s store – the first in the Richmond market – is headed to West Broad Street, the company announced Thursday. The 97,500-square-foot store will anchor West Broad Marketplace, a proposed 350,000-square-foot shopping center west of Gayton Road near the Henrico-Goochland county line.

Vienna, Va.-based NVRetail is behind the project and is under contract to buy the 60 acres that the shopping center will sit atop between Broad Street and Interstate 64. West Broad Marketplace will be the NVR’s first development in the area.

“The Short Pump market is probably one of the better markets in the Mid-Atlantic region,” NVRetail president Jack Waghorn said. “It’s had our focus for some time because of the amount of disposable income there is and the availability of space out there.”

Waghorn would not disclose how much the Cabela’s would cost or who would foot the bill, citing a confidentiality agreement with the retail chain. Cabela’s will lease its space within the development.

Waghorn said negotiations are underway for much of the remaining space at the planned development, which calls for a hotel, a freestanding 38,000-square-foot retail building and several smaller shops.

New apartments and another medical office development are under construction at the Notch at West Creek, just west of GreenGate in Goochland County.

There are about 30 developable acres between GreenGate and the Henrico-Goochland line. Thalhimer’s Mark Douglas is marketing 12 acres for sale at the northwest corner of Gayton and Broad at a $6 million asking price.

West Broad Marketplace is NVRetail’s second shot at developing in that section of West Broad Street, Waghorn said. The company had a chunk of land behind Strange’s Florist off Broad and North Gayton under contract previously. Those plans included Bon Secours and residential builders Kotarides Developers before the deal fell through.

In entering the Richmond market, Cabela’s follows its biggest competitor, Bass Pro Shops, which operates a 140,000-square-foot superstore just off of Interstate 95 in Ashland. About three miles south of Bass Pro, locally based Green Top Sporting Goods has a 67,000-square-foot Ashland store that it took over when outdoor retail chain Gander Mountain closed.

Cabela’s carries an array of outdoor products, including fishing, hunting and camping gear, and boating and ATV equipment. The company has more than 40 stores nationwide, according to its website. The Short Pump store will be its second in Virginia.

Cabela’s spokesman Wes Remmer said strong demand for its products by mail order proves there’s room for the outdoor retail giant to cast a line in the market.

“We’ve been in the direct mail business for more than 50 years now, so we have a very good idea of where our customers live and what they buy,” he said. “We saw customers and saw how much passion people have for the outdoors, and when we put it all together it became a natural fit for us.”