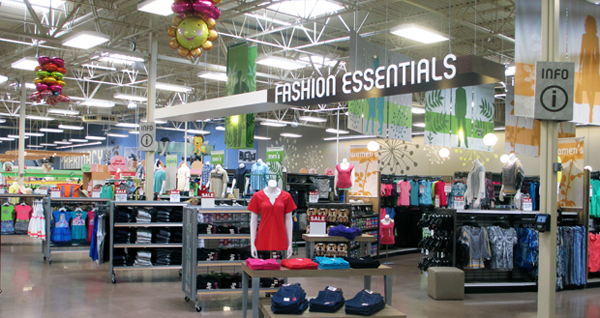 The new Kroger will look to attract shoppers for apparel, in addition to the chain’s usual grocery offerings. (photos by Burl Rolett)

The 123,000-square-foot store and anchor of Staples Mill Marketplace welcomed its first customers Tuesday morning. The Staples Mill shop follows the Marketplace model, offering the grocery items typical to Kroger, as well as about 35,000 square feet worth of other goods including apparel, home goods and – in the case of Kroger’s newest store – an onsite jeweler. 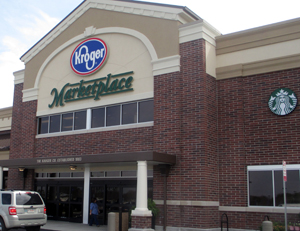 Witt said it cost about $23 million to build the Staples Mill Kroger. It joins a similarly super-sized Kroger at Chesterfield’s Stonebridge as the second Marketplace concept to open in Richmond. The Staples Mill store employs almost 425 full- and part-time workers.

Kroger has two more Marketplaces on the drawing board for Richmond region. The grocer is expanding its existing Rutland Commons location into the larger concept and will build a fourth from the ground up on Iron Bridge Road in Chesterfield County.

Since opening its first Marketplace at Stonebridge in late 2012, Kroger has tweaked the model for its largest concept by dropping furniture from its offerings and adding apparel to the stock of home décor items.

Witt, who was in charge of the Stonebridge Kroger when it opened, said the store’s grocery offerings will be a key to getting shoppers used to buying things other than groceries at Kroger and help it compete with stores like Walmart.

Other strategies such as putting staple goods like milk right next to the clothing section will get customers thinking about the Kroger Marketplace as more of a general retail store than a grocer, he said.

The Kroger anchors Staples Mill Marketplace, a retail development that is still largely under construction at the corner of Hungary Spring and Staples Mill roads. Marchetti Properties is developing the center and is also developed the Target-anchored development on the other side of Staples Mill Road. A Food Lion anchored strip also sits across the street.

Tenants signed on thus far at the Staples Mill Marketplace include Nails 4-U Day Spa and Franco’s Italian Restaurant. They’ve taken space in a strip center west of the Kroger. That building has about 19,000-square-feet of space still available for lease. Marchetti Properties declined to comment on the shopping center’s progress.

The Staples Mill Kroger is the latest addition to a Richmond grocery market that is becoming more and more crowded. Aside from its four Marketplace projects, Kroger is adding a 90,000-square-foot store in Colonial Heights and expanding another location at Swift Creek Shopping Center. There are nearly 20 Krogers in the Richmond area including all stores under construction and on the drawing board.

Martin’s, which controlled the greatest local grocery market share last year, is also in expansion mode. The chain is building a store at Charter Colony Parkway and Midlothian Turnpike to replace a smaller store nearby. It is also eyeing the old Azalea Mall site for a potential 84,000-square-foot store.

Martin’s led the way with 16.67 percent Richmond market share in 2013, according to trade publication Food World. It was followed closely by Food Lion. Wal-Mart and Kroger were third and fourth, respectively.

Where is Staples Mill Marketplace? Did I miss it?

Mike, the shopping center is at the corner of Staples Mill and Hungary Spring roads.