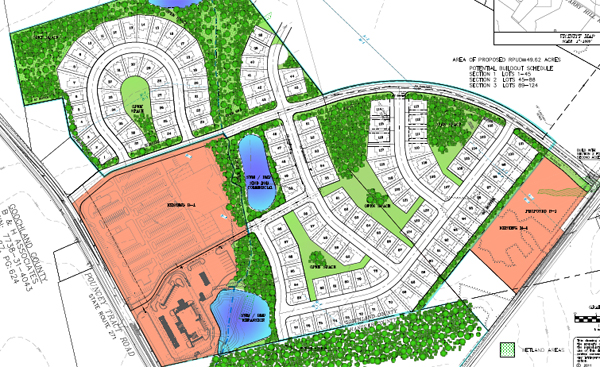 Parkside Village, off Pouncey Tract Road, will be built by Eagle Construction of Virginia. (Submitted photo)

Empty nesters and retirees are a hot commodity for homebuilders in Goochland County.

Two developers are planning more than 200 new houses in Goochland – and each subdivision is targeting the 55-and-up crowd.

They’re two of several new housing developments in the works in Goochland County and the latest in the Richmond market aiming to attract older buyers with the pitch of maintenance-free living.

“Goochland’s gotten to be pretty popular,” said Jim Theobald, a Hirschler Fleischer attorney who is representing Atack Properties on the Swanson Ridge project. “That segment of housing is doing well.”

Atack Properties has planned as many as 100 homes for Swanson Ridge and hopes to begin putting in the infrastructure this fall, pending county approvals. According to county records, Atack bought the 59-acre property in 2012 for $2.1 million.

The company has not yet selected a builder for the project, Theobald said.

Swanson Ridge will be designed with empty nesters in mind, but Theobald said it’s not age-restricted.

“You can have a nice, new house and don’t have to cut the grass,” Theobald said.

Parkside Village, designed strictly as a 55-and-up community, will be built just west of the popular Wyndham housing development. It will have 118 lots. 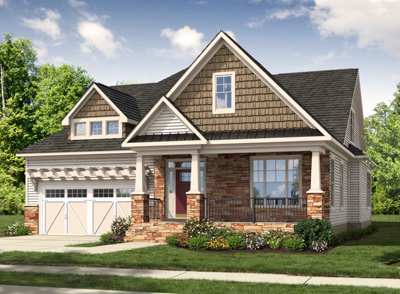 Scott Gaeser, a broker with Eagle Realty of VA who is developing the project, said several plans for the houses are still being put together but that all will have first-floor master suites and some will have the option of adding a basement.

Eagle Construction of VA will build the Parkside Village houses.

“We saw there was a demand near Wyndham for people to downsize into smaller, more manageable houses, but there was nothing available,” Gaeser said.

Gaeser said construction should start in May, and he hopes to have the first house available in September.

Parkside Village includes a commercial element. Gaeser said there are about 12 acres that may eventually hold a small shopping plaza with restaurants and shops.

The Virginia Conservatory for the Performing Arts has also agreed to buy 1.6 acres to build a 12,000-square-foot dance studio, he said.

Pouncey Tract Partners, an entity created to develop the Parkside project, purchased the 64-acre property in 2007 for about $3.6 million, according to county records. Gaeser said his Pouncey team first tried to develop it commercially but didn’t get much response. His group obtained a zoning change last year to allow for a mostly residential development, he said.

About 15 acres fall across the Hanover County line, and Gaeser said the group is holding on to that property, currently zoned agricultural, for future development.

The project is privately financed.