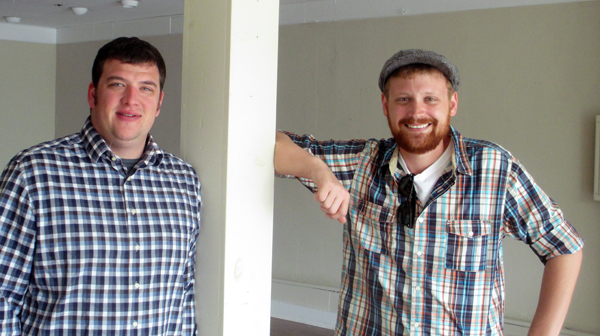 Garden Grove Brewing Co. plans to open a brewery at 3445 W. Cary St. this winter. Founders Ryan Mitchell and Michael Davis had initially looked to set up shop in Chesterfield but turned north in favor of a location that could drive plenty of walkup traffic.

Of the slew of new, local breweries that have launched in recent years, Garden Grove is the first to try to tap into a major Richmond retail center.

“Carytown has its own reputation,” Davis said. “People come from out of town and out of state, ask what can we do in Richmond, and Carytown is a prime spot.”

Garden Grove is co-owned by Mitchell, Davis and head brewer Mike Brandt. They signed a lease for their 3,800-square-foot brewery-to-be earlier this week and plan to open with a three-barrel brewing system, meaning the brewery will be able to turn out a little more than 90 gallons of beer at a time. The space was previously occupied by furniture store Ruth & Ollie.

Mitchell and Davis, both Lee-Davis High School and Virginia Commonwealth University graduates, have been working on Garden Grove full time for about nine months. They hatched the idea after being laid off from jobs at Dominion in 2013 and took the Garden Grove moniker from a song by the band Sublime.

Garden Grove is planting its brewery in a well-traveled part of town, but heavy foot traffic may come with heavy competition. Restaurants all up and down Carytown serve craft beer, but Davis hopes the allure of being at an actual brewery will bring business to Garden Grove.

“We definitely are in competition with anyone that is serving alcohol,” he said. “But we’re a brewery; beer is what we’ll specialize in.”

And for at least a year, the Garden Grove taproom will be the only place to find the company’s beers. Davis said the site’s zoning will allow the opening of a brewery and an on-site tasting room but prohibits off-site distribution.

Garden Grove will try to have six to eight beers on tap at a time, and the company lineup currently includes flagship Carytown Brown, as well as a red ale and a saison.

Before Garden Grove can distribute, Davis said the company will need a special use permit, which the team plans to seek over the next six months. Garden Grove has had discussions with distributors but has yet to sign on with one.

Even if the company’s beers move off-site, however, Mitchell said the business model relies on taproom sales. He hopes to do about 85 percent of total sales on-site, where brewers make significantly better margins.

By the time Garden Grove sells its first beer, Mitchell said the team will have about $340,000 invested in the business. That figure includes about $30,000 worth of work to get the Carytown space ready. Plans call for a two-story tasting room with a small upstairs office and a rooftop deck facing away from Cary Street.

Garden Grove would like to feature art galleries in the second floor and hopes to be able to rent out the brewery as an event space.

While the beer will initially be limited to the Cary Street brewhouse, Mitchell said he’d eventually like to do some small-time distribution around Richmond.

He mentioned the Fan, the arts district and a couple of other Richmond neighborhoods for distribution, with one major exception – Carytown.

“As far as Carytown is concerned, we would like it to be ‘Hey, check them out down the street,’” he said.

Opening in Carytown is a dream that we all had as owners. We want to drive business into Carytown while working hand in hand with retail stores and restaurants. Distribution is hypothetical at the moment, we hope to be distributing in Richmond within one year of opening. Carytown is no exception when it comes to distribution. We would love to have our beer down the street!

I would strongly advise Garden Grove to consider self distribution at the beginning. Virginia law does allow breweries to self distribute (although it can be some what tricky) and as more breweries open in Richmond the ones that will be successful five years from now will be the ones that sell their beer the best (brewing good beer can’t hurt either). Having your own people sell the beer would be a unique advantage in what is quickly becoming a crowded marketplace.