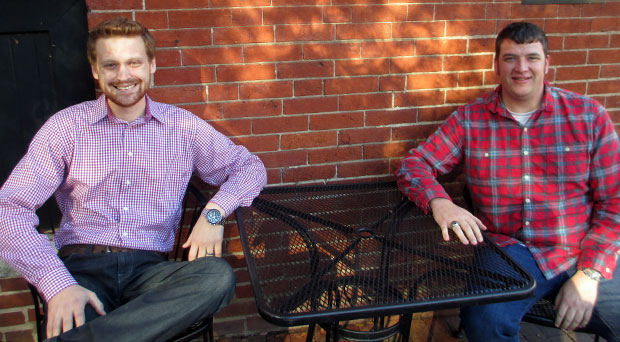 Mechanicsville natives Michael Davis and Ryan Mitchell hope to bring another name to the exploding local beer market by opening Garden Grove Brewing Company in Chesterfield in May.

Davis and Mitchell caught the entrepreneurial bug after they were laid off this year from jobs at Dominion.

Garden Grove is close to a deal to move into a 4,000-square-foot building in Chesterfield, but Davis said they are still deciding whether to lease the property or buy it outright. They would not give an exact location for the business but said it is near a large Chesterfield hotel.

Davis and Mitchell are graduates of Lee-Davis High School and Virginia Commonwealth University. The two have hoped to go into the restaurant business since they were teens, when they got a taste for food service while working at Ruby Tuesday.

The Garden Grove concept has been brewing for about six months, although Davis said they’ve been working on it full time for about three months. Mitchell, 27, and Davis, 26, pulled the Garden Grove moniker from their childhood CD collections: the name comes from lyrics on a 1996 album by the band Sublime.

By the time Garden Grove launches, Mitchell said the duo will have about $500,000 invested in the business. They are paying most of the startup costs with personal savings and financing part of the venture with loans.

The company will start as a three-barrel capacity “nanobrewery,” a term that denotes a brewhouse with four or fewer 31-gallon barrels.

Garden Grove’s initial capacity will be twice what Midnight Brewing started with in Goochland in 2011. It’ll be about a fifth of the capacity Ardent Craft Ales is starting out with in Scott’s Addition. Lickinghole Creek Craft Brewery opened in Goochland this year with a 20-barrel system.

Mitchell and Davis are hopping into a crowded industry. This year alone saw the launches of Lickinghole, Strangeways Brewing Company and Isley Brewing Company. Ardent and Triple Crossing Brewing have their sights set on 2014 openings.

Davis hopes creative recipes will set his brewery apart from the crowd. He hinted at oatmeal cookie and avocado as potential flavors for blending into Garden Grove beers.

“I believe we’re going to be one of the craziest breweries out there in terms of what we’re putting into our beers,” Davis said.

They’ll launch with five staple products, recipes cooked up by company brewmaster Mike Brandt, including the Danny on the Mountain IPA, Boxer’s Brew Stout and Soul Sucker Hefeweizen. Mitchell and Davis plan to unveil the first batches at a Jan. 25 beer tasting at the John Marshall Apartments in downtown Richmond.

Garden Grove will invite food trucks to set up onsite and will sell prepackaged food items but will not have a restaurant-style kitchen, the pair said.

Davis and Mitchell have had some initial conversations with distributors, but the company is far from inking a deal. Mitchell said they will probably sell their product exclusively from the brewhouse for Garden Grove’s first year.

“We need a year to really find our market,” Davis said.

Davis and Mitchell have no immediate plans to move back into the corporate workforce. Garden Grove is a full-time venture for Mitchell. Davis is working a side job but plans to move into the brewing business full time in the near future.

“We probably never would have done it if we hadn’t been laid off,” Davis said. “It is fun to control our own destiny and not be on corporate time.”

Knowing both these Great Guys personally, I can attest that I only see great success in their future with GGB.

Michael and Ryan, Nice article. Don’t worry about what others may have to say. When you make your first million, he will come looking for a job. Can’t wait to help out and manage the cigar bar!

Unbelievably excited for this. Only a few more months before I become a 6 pack investor and social gathering spokesperson for my new favorite brewery.

Looking good, Gentlemen! Can’t wait for the supply, we’ve all got the demand! See you on January 25th!

Congrats guys! Very excited for you and can’t wait to try your first batch (although, that logo with the rocking chair looks like you should be brewing tea, not beer)…Best of luck.