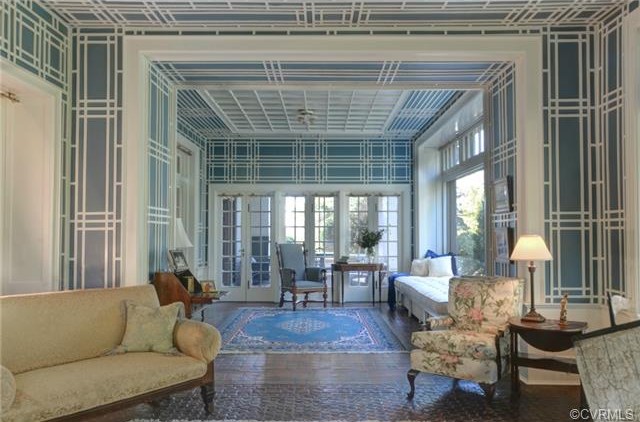 The sunroom at Rothesay. Photo courtesy of Jami Carlton.

As the story goes, Rothesay – a nearly 10,000-square-foot riverfront mansion near Carytown — was built to appease an unhappy wife.

Anne Anderson, one of the manor’s current residents, said Rothesay began as a place for the newlyweds to settle.

“Mr. Bryan had a house built for his wife and she didn’t like it,” she said. “So he had this built.”

The mansion at 1234 Rothesay Circle is now on the market for $4.75 million and is currently one of the highest-priced residential listing in the Richmond area.

Anne Anderson and her husband, George Anderson, sat last week in the home’s sunroom, which affords panoramic views of the James River, and told stories of their beloved home. They said they’re ready to start a new chapter in their lives and listed the home in April with Long & Foster real estate agent James Ashley. 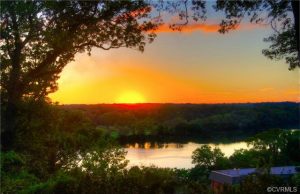 A view of the James River from Rothesay. Photo courtesy of Jami Carlton.

George, formerly the longtime head of his family’s business Anderson & Strudwick, has lived at Rothesay for most of his life. His father, Edward Anderson, bought the house from the Bryan family in 1934.

“Nobody has this view, I don’t think, in Richmond,” said Anne Anderson, an English-born, one-time professional dancer. “If it’s not unique, it’s nearly unique. It’s just an amazing home.”

The English Tudor-style mansion has more than two dozen rooms on three floors. It has eight bedrooms and six-and-a-half baths and sits on a private 8 acres.

The house got a complete makeover in 2010 by dozens of decorators as Richmond Symphony Orchestra League’s designer house, and some of the rooms still bear the designers’ stamps. The Andersons had to relocate for three months during the process and about 8,000 people toured the home, Anne Anderson said.

The home also features gardens conceived by noted early 20th century landscape designer Charles Gillette. It also has a tennis court, a swimming pool and a separate garage with a two-bedroom apartment. A pair of bald eagles makes its way to Rothesay’s grounds in the fall and deer often pass through, Anne Anderson noted.

Ashley said he’s advertising the property locally and throughout the northeast to find the right buyer. 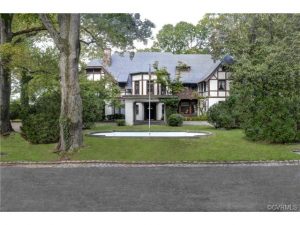 “For a property like this, it is very unlikely to have someone walk in and say ‘I’ll take it,’” Ashley said. “It’s something they have to think about.”

The market may be moving in their favor.

Another $4-million-plus local listing recently found a suitor. Clear View, a 13,000-square-foot River Road mansion given to the Virginia Historical Society by Lora and Claiborne Robins, is under contract to be purchased.

No details on Clear View’s pending sale have been released. The house was listed for $4.25 million in April.

In March, another James River estate sold for $3.45 million.

The same month, the historic Monacan Farm in Powhatan County sold for $3.04 million. A contiguous 400-acre parcel also was sold in a separate deal to the same buyer, pushing the final combined price tag more than $5 million.