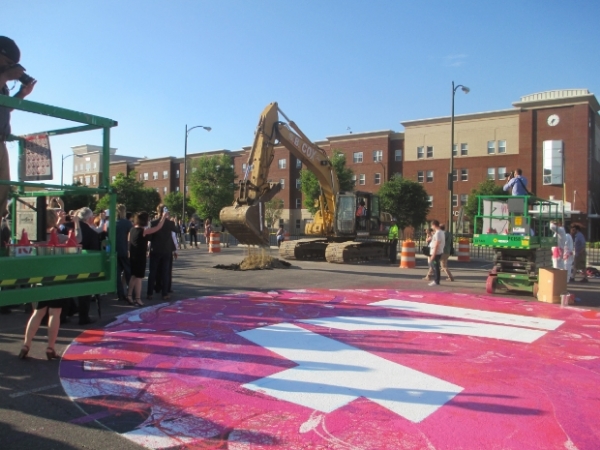 Ground is broken on VCU’s Institute for Contemporary Art. Photo by Brandy Brubaker.

With a shovel of dirt and a splatter of paint, Virginia Commonwealth University’s future Institute for Contemporary Art has officially marked its territory on West Broad Street.

VCU hosted a groundbreaking ceremony Tuesday for the $35 million facility to be built at the corner of West Broad and Belvidere streets. 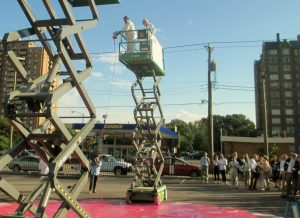 Steve Markel dumps paint on the site of the future VCU Institute for Contemporary Art. Photo by Brandy Brubaker.

The group not only broke ground in the literal sense, but also poured colorful paint on the pavement from raised manlifts.

The building’s official name will be the Markel Center at the VCU Institute for Contemporary Art, in recognition of a contribution by Markel Corp., the university said.

“It’s still a drawing but it’s not far away from being a reality,” Steve Markel, Markel Corp. vice chairman and co-chair of the ICA fundraising committee, said at Tuesday’s event.

About $31 million of the $35 million needed for the construction of the facility had been raised as of Monday. VCU picked up additional donations Tuesday of $100,000 from The Martin Agency and $400,000 from an anonymous donor.

Gilbane Building Co. will head up construction of the 43,000-square-foot facility. It is slated for completion in 2016.

Bill Royall, founder of Royall & Co., a donor to the project and also a co-chair of the ICA committee, thanked the crowd that gathered under a tent at the site Tuesday. 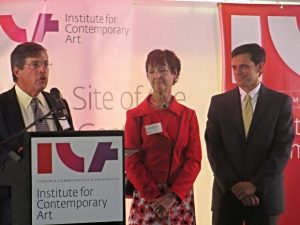