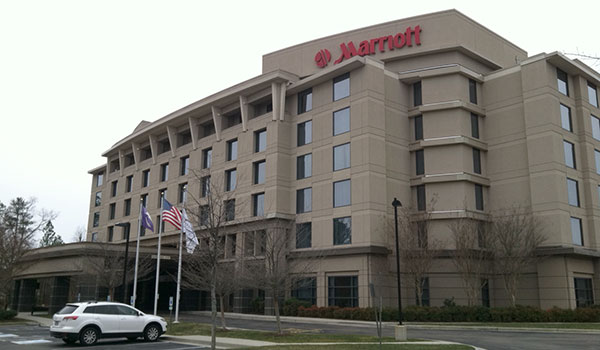 Lingerfelt CommonWealth Partners took over the The Richmond Marriott West on Dominion Boulevard in Glen Allen, a deal announced on Tuesday. Photo by Michael Schwartz.

A major office development firm is jumping into the Richmond hotel market.

The company announced the deal Tuesday and said it plans multi-million dollar renovations for the property, which had been threatened with foreclosure under its previous owner.

According to federal court records filed Tuesday, the hotel at 4240 Dominion Blvd. was transferred to a CFLC Marrich Sub LLC in a deed in lieu of a foreclosure transaction. Such deals are typically crafted to allow a struggling borrower to transfer a property to either a lender or a new owner approved by the lender in order to avoid foreclosure proceedings.

The Richmond Marriott West was previously owned by Kentucky-based Columbia Sussex Corp. The 154,000-square-foot property began to move toward foreclosure last year after Columbia Sussex fell behind on a $31.6 million loan that backed the hotel. The property was most recently managed by a court-ordered third-party receiver.

Upgrades to the hotel are slated to begin in the fall and will include a revamped lobby and updated guest rooms, Lingerfelt CommonWealth Partners said in a release.

The hotel will remain open throughout the project. The new owner expects to finish renovations by summer 2015. CommonWealth Lodging, an affiliate of Lingerfelt CommonWealth Partners, will manage the hotel.

The Marriott acquisition is a departure from the office-heavy portfolio Lingerfelt CommonWealth has put together in the three years since its inception. The company owns nearly 1 million square feet of property in Nashville and also scored a 2.1 million-square-foot leasing and property management portfolio in Florida earlier this year.