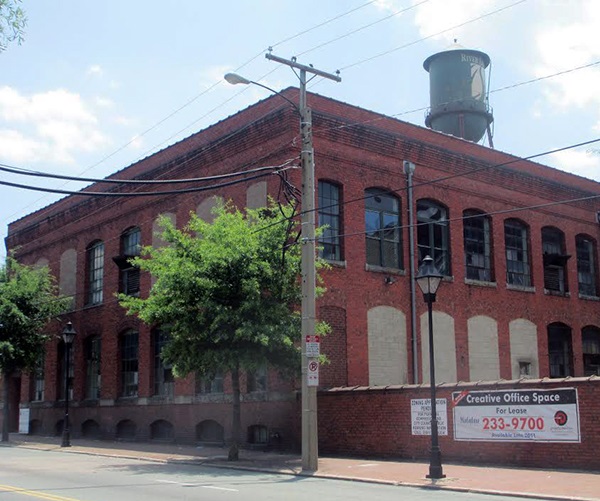 The broken-down building at 2323 E. Main St. was originally advertised as “creative office space,” but now its owners are set to begin work on a $10 million apartment project. Photos by Burl Rolett.

“We had a lot of showings, but we just could not get a critical mass of leasing at one time in one place to enable us to underwrite and finance the building,” MacFarlane said. “But there has always been interest from a residential standpoint.”

MacFarlane and McDonald bought the buildings in 2011 from Forest City Enterprises, an Ohio-based REIT that also developed the nearby Tobacco Row. They paid nearly $2 million for the 58,000-square-foot property and a pair of adjoining surface parking lots, according to city records.

Then they began trying to draw in potential office tenants. They focused on companies in advertising, marketing, software development and other industries, MacFarlane said.

The property lured some prospects, MacFarlane said, but it would have needed about 45,000 square feet worth of preleases to get the project off the ground. 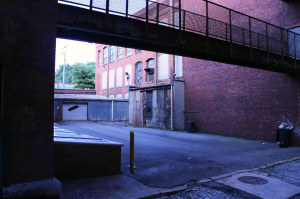 MacFarlane and McDonald want to the space between the two buildings into a pool and patio area.

MacFarlane said attracting companies to a downtown office location was a tough sell because of the competitive downtown office market and steep city tax rates. The professional services-type businesses the developers were seeking would have had to pay a city gross receipts tax of 58 cents per $100 in sales. Neighboring Henrico County’s gross receipts tax for comparable firms is 20 cents per $100 in sales.

MacFarlane specifically mentioned Rocketts Landing, which sits just east of the city border in Henrico County, as a tough competitor.

“A company can kind of keep its city feel and be close to downtown, but it can still be in Henrico,” he said. “As we tried to lease space in a creative environment downtown, it was a hurdle that we had to overcome, and in a couple of instances we couldn’t.”

They shifted the project toward apartment development at the end of 2013. MacFarlane said he hopes to begin work on the apartment conversion in two or three weeks with plans to move the first tenants into the renovated building in spring 2015.

MacFarlane said they are working to finalize a loan with Union First Market Bank to finance the project.

Walter Parks is the building’s architect and MGT Construction will be the general contractor.

MacFarlane and McDonald have lined up Marc Hirth of Preservation Advisors LLC as a state tax credit investor, and Sherwin Williams will invest in the project’s federal tax credits.

The building’s 71 apartments will be mostly one-bedroom units. MacFarlane didn’t give exact rental figures for the property, but he said they will be priced at slightly upscale market rates.

Plans also call for 5,500 square feet of commercial space in the property’s westernmost building and a small new construction building with a clubhouse, fitness room and public gathering space.

An outdoor space between the two buildings will contain a pool and patio.

“It could have been a great gathering place for an office use,” MacFarlane said. “But it’s a cool space either way, and the fact that the buildings are oriented around that courtyard could really make it a special space.”

I moved my business for Richmond to Henrico largely for tax reasons. I do not understand why, with poorer service, the city thinks it can charge more and keep businesses. What am I missing?