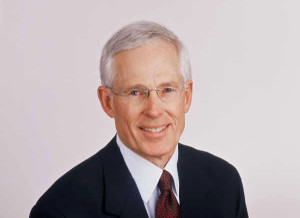 Sharp is remembered as a natural leader. His reach extended beyond Richmond with companies such as Crocs and Flextronics.

Sharp, who was 67 and had Alzheimer’s, rose to prominence in the Richmond business scene in the early 1980s when he was brought in to succeed the CEO of former local electronics retail giant Circuit City.

In his 30s at the time, Sharp had already started and sold Applied Systems Corp., a computer hardware and software company. It was his skill with computer systems that helped him gain recognition in Circuit City.

Alan Wurtzel, the longtime CEO of Circuit City, recalls meeting Sharp in the early 1980s when the company needed an upgrade in its cash register and inventory system.

Wurtzel said the company had a problem getting its computer systems to recognize model numbers on TVs and other electronics.

Circuit City eventually found someone in Washington, D.C. that had connections to a guy with a slick system that could handle the problem.

“He said, ‘The guy who put this all together is a very bright guy named Rick Sharp,’” Wurtzel said in a phone interview Wednesday. “I said ‘I’d like to meet Rick Sharp.’”

After a few fits and starts, Sharp’s system was what the chain needed. Wurtzel said he realized Sharp could help the company in another way.

Wurtzel was planning his retirement and told the board he would groom someone to take his spot. He wanted Sharp.

“It was a very unconventional choice,” he said. “Rick had zero retail experience. He was a computer genius by training.”

But Wurtzel said that didn’t matter to him.

“He didn’t know a Sony from an RCA, but I thought he was smart as hell,” Wurtzel said. “I was right, he’s brilliant.”

Sharp became Circuit City’s CEO in 1986. In the 1990s, Circuit City was set back some $200 million from a failed disposable video rental system called Divx that was to compete with DVDs and traditional video rental models. The company pulled the plug on the project in 1999.

Still, Sharp led the company during its heyday as it grew to more than $10 billion in revenue a year. He retired from the company in 2000, nine years before it collapsed in bankruptcy.

It was during Circuit City’s dominance that Sharp realized the company may have saturated the market and needed a new future source of revenue.

He and others worked on an idea to apply Circuit City’s rules of retail to the used car market. That idea became CarMax, born in 1993. The company, headquartered in Goochland, has grown to produce more than $12 billion a year in revenue. It’s the country’s largest used car retailer and reached the top half of the Fortune 500 list this year. Sharp retired as chairman of the CarMax board in 2007.

“They used the same consumer principals of giving the customers a very transparent deal. That was revolutionary in the car business,” Wurtzel said.

But beyond Circuit City and CarMax, Sharp put his money and knowledge behind other new companies that eventually took off. He was a founding investor in firms such as Flextronics International and Crocs.

Sharp studied electrical engineering at the University of Virginia and computer science at the College of William and Mary. But Steve Cannon, Circuit City’s former general counsel who worked under Sharp, said he had a particular, often unteachable attribute that made him successful.

“Rick was kind of the consummate leader,” said Cannon, now chairman of Washington, D.C. law firm Constantine Cannon. “Everyone around the table would have an opinion – and he encouraged debate and a lot of conversation – but eventually it would come time to make a decision, and Rick would usually speak last. And you listened.

“He had a commanding presence that really made people want to follow him. It is hard to teach leadership, but in the end there are certain natural leaders.”

A memorial service for Sharp will be held at a later date.

His family has asked that donations in his honor go to the Stay Sharp Fund, administered through the Community Foundation of Richmond. Sharp helped create the organization to fund research forAlzheimer’s.