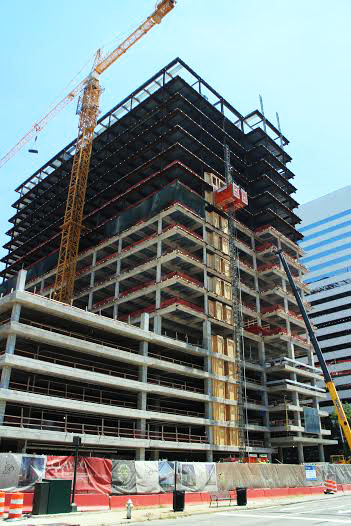 “When you build a building like this, you never really spend a lot of time pushing the marketing efforts until you get to a point people can walk in and look around,” Chapman said. “But every now and then you get someone who can really see how it will work like CCA Industries does – they’re a very sophisticated company.”

CCA will lease one entire floor at Gateway Plaza. It will join law firm McGuireWoods, which is anchoring Gateway Plaza with its 205,000 square foot lease.

CCA and McGuireWoods will vacate their current homes across Ninth Street at One James Center. Jay Jones of CCA Industries declined to comment on the move over to Gateway Plaza. Goodwin could not be reached for comment Tuesday afternoon.

Goodwin’s firm is a holding company with a portfolio that includes the Jefferson Hotel and a handful of other resorts. Goodwin, who sold AMF Bowling nearly 20 years ago for more than $1 billion, also owns real estate development company the Riverstone Group.

In total, Gateway Plaza will cost about $124 million to build.

An affiliate of New York-based Lexington Realty Trust is financing the construction and is under contract to buy Gateway Plaza from Clayco upon the building’s completion.

Currently a skeleton of steel beams, Gateway Plaza will begin looking like an office building this summer. Chapman said its glass curtain walls should start showing up by the end of this month.

Clayco plans to finish the building by next summer, and McGuireWoods is scheduled to move in August 2015.