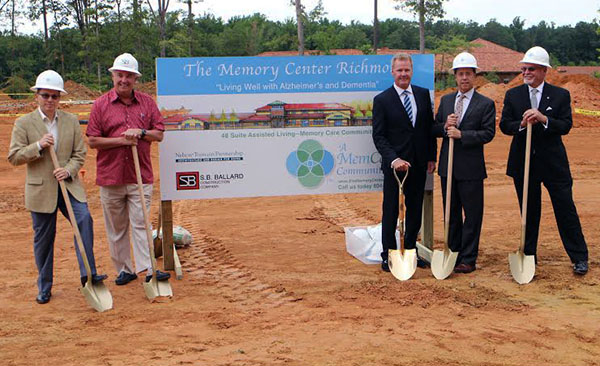 The Memory Center has broken ground on a 35,000-square-foot complex near Bon Secours St. Francis Hospital at CenterPointe. Once it’s built, The Memory Center will be a 48-suite live-in facility and covered town center.

“We have a walking-village concept,” Memory Center CEO Kevin DiBona said. “We’ll have a movie theater, a general store, a full-service tavern and a hair salon.”

CenterPointe will be The Memory Center’s second location when it opens early next year. The first Memory Center opened in Virginia Beach in 2008, and DiBona said the company would like to build eight more throughout the Southeast. It costs about $13 million to construct a building like The Memory Center is putting up in Chesterfield, he said.

The building will feature both private and semi-private suites and will only admit residents who have been diagnosed with Alzheimer’s disease or dementia. The Memory Center could accommodate up to 96 residents, but DiBona said the facility could not admit that many patients and keep within a company-mandated 4-to-1 resident-to-staff ratio.

The 48-suite Virginia Beach location has about 60 residents with more on a waiting list.

e residential facility will be divided into four “neighborhoods,” each with 12 suites. Courtesy of The Memory Center.

“I don’t think we can build enough of them soon enough, which is unfortunate,” DiBona said.

The Memory Center bought its 3.5-acre parcel from Riverstone in February for $1.25 million.

Jeff Galanti, a principal at Riverstone, said the Memory Center made a good addition for CenterPointe because the design of the building will fit well within the complex.

“They were willing to do high-quality architecture, and since we own so much of the land, that was important to us,” Galanti said.

Minnesota-based Nelson Tremain Partnership, which specializes in assisted living homes, is the building’s architect. S.B. Ballard Construction Co. is the general contractor, and BB&T is financing the project.