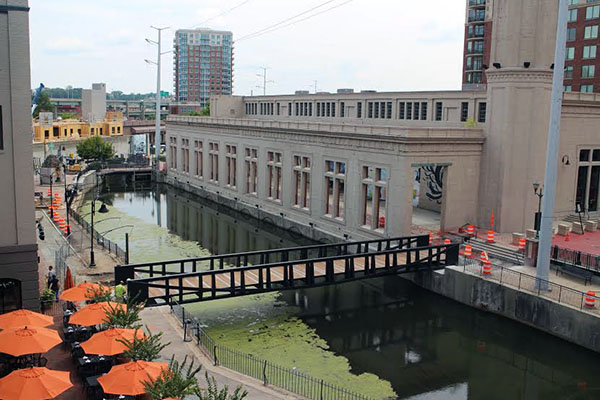 The latest piece of Richmond’s riverfront-area development push was lowered into place Friday.

A new pedestrian bridge was installed spanning the Haxall Canal between Riverside on the James and the Locks development. The nearly $2 million city-funded addition is 87 feet long and lets off close to the front door of Casa del Barco, a restaurant in the first floor of the Locks Italianate building.

Kevin Healy, owner of Casa del Barco, said while he’s certainly not staking his business on the thoroughfare, it’s a welcome addition.

“My guess it that it will change the pedestrian flow, and instead of our front door being at a dead end, it will be the access point to Brown’s Island,” Healy said. “I don’t think it will be a life-changing thing for the restaurant, but it certainly won’t hurt.”

The bridge comes as construction is heating again at the canal. The Locks developers, a venture between WVS and Fountainhead Development, are working on a new construction apartment project just east of the development’s current buildings.

On the other side of the canal, F.W. Sullivan’s opened a second location in September of last year and then rebranded as Haxall Point in May 2014.

Healy said business has been improving on the canal, adding that Casa del Barco sat 700 more guests this July than in the same month last year. Still, he expects business will ebb and flow throughout the seasons in years to come.

“It’s kind of a marathon and not a sprint down here,” he said. “It is a little seasonal, and we’re developing that pattern and becoming more familiar with that pattern.”

Why did the city pay for this, shouldnt this have been paid for by the developers and business owners who will supposedly profit from it?

This was a tradeoff for land for public use between the City and the developer and is a couple of years overdue.

I wish they would have built it more of an arched bridge rather than straight across. Especially if they ever do plan on connecting this section to the canal walk so that the cruise boats can go from great ship lock harbor all the way to Browns Island. Right now looking at it the bridge is to low for a boat like that to get under making in less likely that it will ever happen per the master plan for the canal from the late 80s and early 90s.

I love that it will be so much easier to cross, and think it will increase recreational use. Maybe it will even prompt a cool reuse for the power plant.

But I agree with William. Why the heck wouldn’t they have built an arch, in order to ensure more options for future canal use? Especially at that price? Maybe it was an ADA issue or something?

What else was part of the deal here? You can build an entire building or a couple of really nice restaurants or a dozen houses for $2 million. I don’t see it.

I would gladly walk around to get across, if that money would have gone to a crumbling city school building instead. Nice bridge, though.