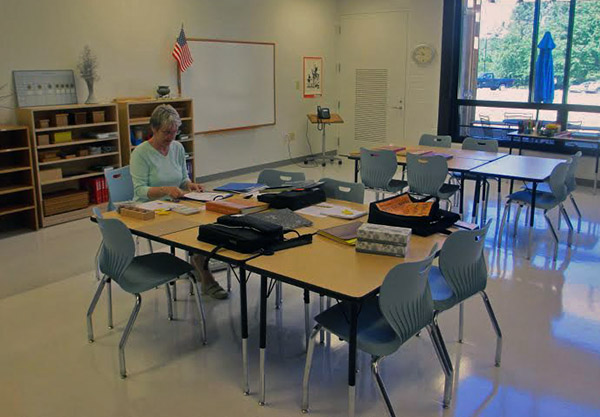 Mary Hogan prepares her classroom for the return of upper school students at Richmond Montessori. Photos by Brandy Brubaker.

A local private school will debut a new classroom building when students return to campus after Labor Day.

The school raised almost $800,000 to help cover the cost of the $3.9 million project. Greg Wojcikewych, Richmond Montessori’s head of school, said it financed the rest through BB&T. The building will house fourth, fifth and sixth graders and a middle school science lab.

“We had some growing pains,” Wojcikewych said. “We needed to expand. Our upper grades have been growing.”

The new Richmond Montessori building is on Parham Road in the West End, not far from Collegiate School.

He said middle school enrollment has doubled since last year to 26. The school has 310 students between the ages of 2 and 14.

The building was constructed on a parcel Richmond Montessori purchased in 2007 next to its main campus. The school plans to continue to grow there with future construction, including a new gym and middle school beginning in the next couple of years.

The gym building, which would include offices and a catering kitchen, is expected to be about 9,000 square feet and could cost around $2.5 million, Wojcikewych said. Specifications for the new middle school are still being worked out, but it should be about the same size and cost as the building that was just completed. The fundraising campaign for those projects hasn’t let been laid out.

Donations for the project came from the Mary Morton Parsons Foundation, the Marietta McNeil Morgan and Samuel Tate Morgan Jr. Foundation, the Emily S. & Coleman A. Hunter Charitable Trust and contributions from students’ families and alumni. The capital campaign raised almost $47,000 more than its goal.

Richmond Montessori was founded in 1965 and moved to the Parham Road campus in 1970s.