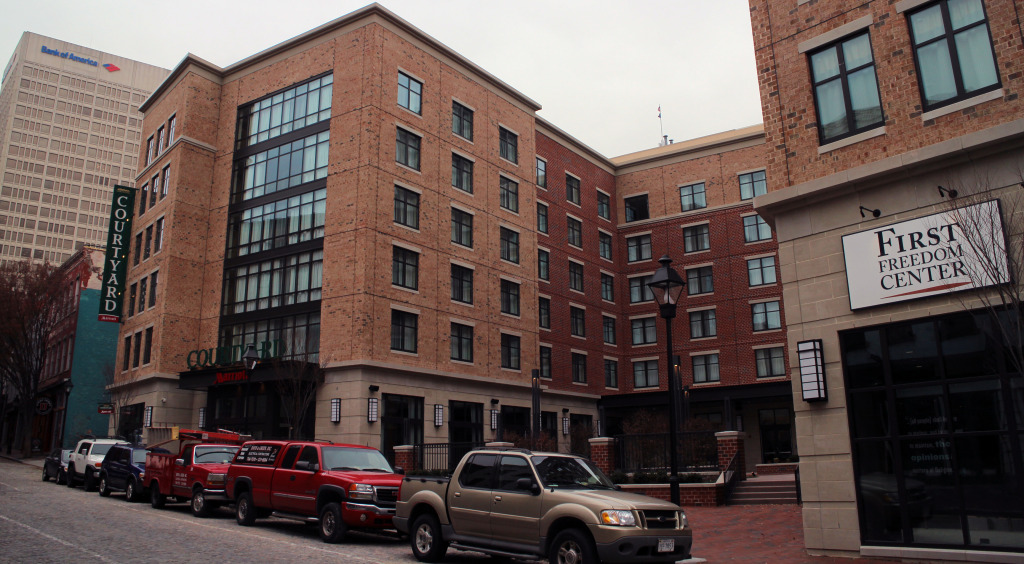 The Shockoe Slip property includes two hotels and the home of a nonprofit. Photos by Michael Schwartz.

The newest entrant in the downtown hotel market has checked into Shockoe Slip.

The 137,000-square-foot, dual-branded Residence Inn and Courtyard by Marriott opened for business Monday afternoon at 14th and Cary streets.

The six-story property has a total of 210 rooms, with 135 on the Courtyard side. It also houses what will be the new headquarters of local nonprofit the First Freedom Center.

The project was developed by the Apple Hospitality REIT, a downtown-based real estate investment firm that owns nearly 200 hotels around the country. Development costs for the project were around $36 million, according to Apple REIT SEC filings. DPR Construction was the general contractor.

The development in the Slip also included construction of a new home and monument for the First Freedom Center, a downtown nonprofit that celebrates the 1786 Virginia law that guaranteed religious freedom and was drafted at the corner of Cary and 14th. 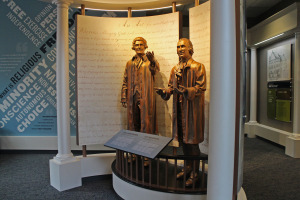 Nonprofit First Freedom Center will open in the hotel property next month.

Ben Howerton, chair of First Freedom Center’s board of trustees, said the organization will officially open its new space next month. It will eventually move out of its current offices at 1321 E. Main St.

The hotel project is more than four years in the making for Apple REIT. It first began the special use permitting process around 2010 and received the green light for development from the City Council in 2012.

The property’s U-shaped layout, designed by local architecture firm Baskervill, gives each hotel brand its own uniquely designed check-in area and lobby. The main entrance for the Residence Inn is on 14th Street and the Courtyard entrance is on Cary Street.

Pellitt said rooms on the Courtyard side go for around $150 or $200 this time of year. Residence Inn rooms are $20 to $30 more per night, depending on the length of the stay.

Julia Raftery, director of sales for the hotels, said that in addition to business travelers and tourist, the hotels expect to pick up business from General Assembly members coming in and out of Richmond for legislative sessions.

The building also has 2,100 square feet of meeting space, as well as a restaurant and bar.

The two hotels were a subject of a visit from Commercial Coffee this morning. Apple REIT did a beautiful job. It blends right in with Shockoe Slip and Virginia Avenue. The First Freedom Center is a must see for every resident and tourist. They tried to be inclusive but they did not give due credit to the Dutch IMO. (My Dutch wife will be disappointed!) Still, be sure to see it soon.