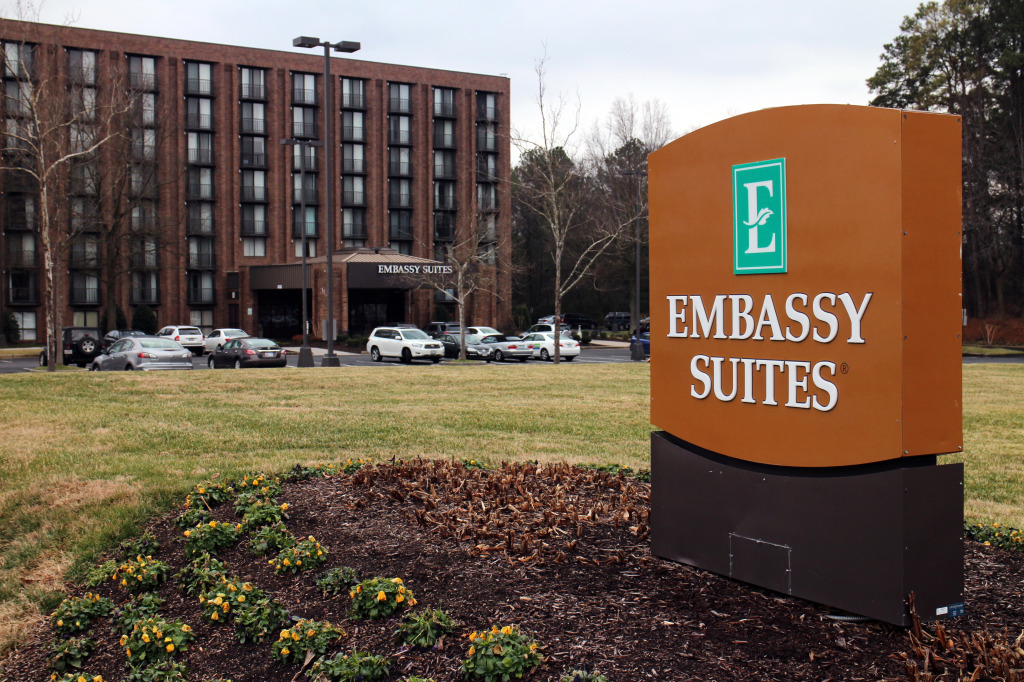 A Glenside Drive hotel is under new ownership. Photo by Katie Demeria.

A Richmond hotel empire has succeeded in yet another takeover.

Chester-based Shamin Hotels acquired the Embassy Suites at 2925 Emerywood Parkway, near the intersection of Broad Street and Glenside Drive, in a deal that closed Jan. 8.

The company paid $13 million for the 224-room property, bringing its total number of hotels to 37 across three states, including 28 around Richmond.

It purchased the 185,000-square-foot hotel out of foreclosure after it went back to the owner of the loan on the property at an auction in June.

Shamin made a bid on the hotel at last year’s auction, but played the patient hand after bidding went above its price tag.

The gamble paid off – Shamin’s auction bid was $15 million, about $2 million more than what it ended up paying.

“We own hotels in every other submarket, and this is the one area where we don’t have a presence.” Amin said. “The location is phenomenal.”

Shamin has extensive renovations planned on guest rooms and public areas set to take place later this year and early next year. The hotel will remain branded as an Embassy Suites and all the employees will stay on, Amin said.

“The main reasons we purchased this property were the phenomenal team, the great location, and the strong brand,” Amin said. “The location, the brand, the staff and then the renovations that we’re going to be doing are going to make this hotel a first choice for travelers in the Richmond area.”

Amin did not say how much the company will spend on renovations but said plans will be finalized over the next several months. The company has not yet selected a contractor or architect for the project.

The Embassy Suites was previously owned by Crescent Hotels, which fell behind on a $33.5 million loan backed by the property. The note holder that sent the property to foreclosure was Rockwood Real Estate Advisors.

This latest deal is Shamin’s second local acquisition in the last 18 months. It bought the 237-room Holiday Inn Koger Center off Midlothian Turnpike in mid-2013, which it promptly renovated and converted into a DoubleTree by Hilton.

Shamin is busy with other projects elsewhere, both locally and around the state. It recently received rezoning approvals for a new Hilton Garden Inn it plans to build in Herndon, Virginia.

And in downtown Richmond, Shamin has work underway on its conversion of 700 E. Main St. from an aging office building into a dual-branded Hilton hotel. That concept is set to open in July.

“We’re excited about the downtown project, it’s moving forward well, and now we’re going to focus on the existing hotels we have,” Amin said.

The company is also planning renovations on some of its other properties, including it Courtyard by Marriott near Virginia Center Commons and the Homewood Suites at the airport.

Somebody needs to do something with the Grand Magnoson or whatever its called on Broad St between Home Depot and Altria HQ. Please is looking very Detroitish.