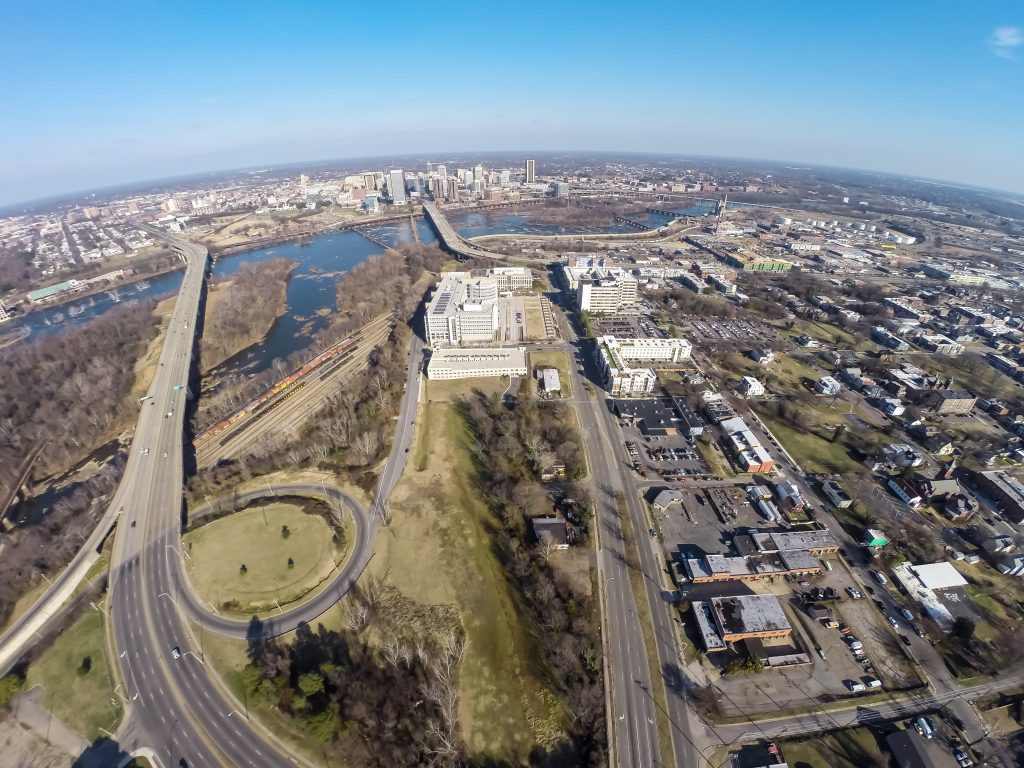 A plot of land at 1401 Semmes Ave. (foreground, left) is up for grabs. Images courtesy of Colliers International.

Six acres of prime riverfront real estate has hit the market in Manchester, making room for a potential new development to settle into the growing Southside neighborhood.

Developers Robin Miller and Dan Gecker are looking to sell a chunk of land at 1401 Semmes Ave. next to the Lee Bridge.

Looking to bring in about $8 million from the sale, they’re confident the land has potential for more than the usual apartment projects that have sprung up around Manchester in recent years.

“This site screams for commercial mixed use,” said Miller, who runs Urban Development Associates with Gecker.

The company has focused mainly on residential projects and has built hundreds of apartments in Manchester over the past 11 years.

Milam referred to the land as the last piece of riverfront property of a significant size available in the city. He said he has reached out to not only developers, but medical systems, the state government and VCU. 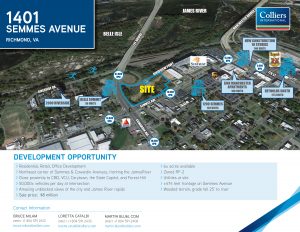 Milam said the site could be used for a grocery store, considering the recent influx of residents into Manchester.

“The thing cries out for mixed use, and certainly we’re after that kind of user that would do both residential and commercial on the site,” he said. “We have a number of substantial folks who are real interested.”

The property, which is currently raw land, sits at Semmes and Cowardin avenues. It is zoned as RF-2, or riverfront 2, which Milam said is very flexible. It can support almost any kind of use, provided that the development retains sight lines to the river.

The $8 million asking price was derived from considerations of the most likely uses for the site. Milam said a developer could build at 500 apartments on the lot.

Urban Development Associates acquired the parcel in 2006 as part of a large land deal with the Virginia Museum of Fine Arts.

Harwood Cochrane, founder of Overnite Transportation and local philanthropist, had donated 30 acres of land throughout Manchester to the VMFA.

The museum put out a request for proposals, seeking possible plans from developers for the donated land. Miller and Gecker competed against four other developers and ultimately bought several parcels for $4.77 million that included several single-family homes and some larger plots for development.

“It was a leap of faith,” Miller said.

On some of that land, Miller and Gecker have since developed the 1200 Semmes apartments and the Terraces at Manchester. The latter should be completed this June.

Colliers brokers Loretta Cataldi and Martin Blum are marketing the property along with Milam.

This property along with the Suntrust building was originally the location of the Atlantic Coast Line Railroad’s Shops Yard which served downtown Richmond (see the old bridge foundation next to the Manchester Bridge).

Couldn’t this be a great mixed-use commercial project with a ballpark? Condos (and stands) overlooking the James and the skyline, no flooding, no slave artifacts, easy access, burgeoning area…

Yay! More small, overpriced Manchester apartments without parking that will be an afterthought in 15-20 years when another area in Richmond is perceived as the “next up and coming” area.

Photos from when this was an operating rail yard along with history: