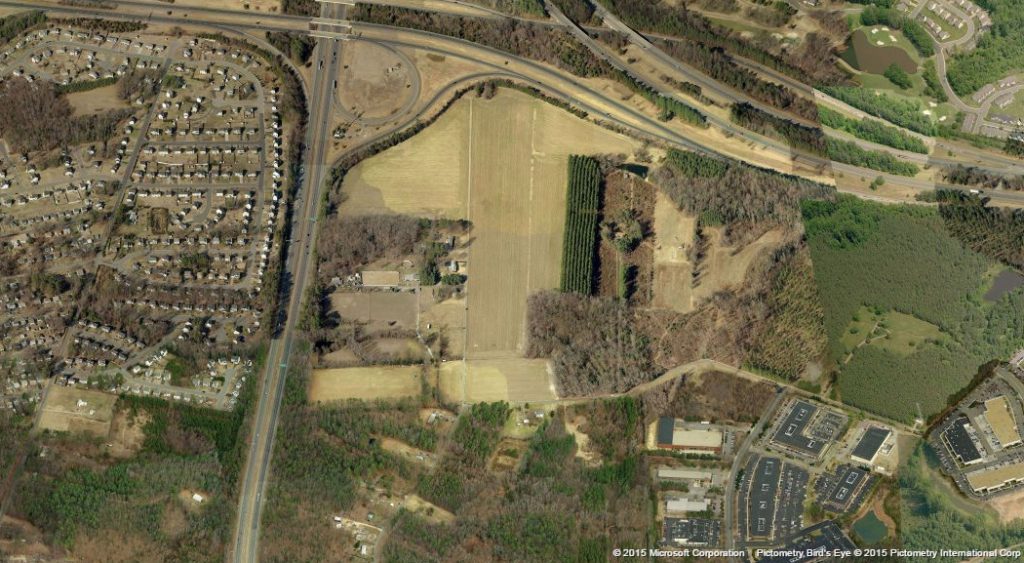 A nearly 100-acre plot of land on Scott Road is under new ownership. Image courtesy of Bing Maps.

A chunk of land in northern Henrico County has a new, big-name owner.

Riverstone Principal Jeff Galanti said the developer does not yet have any finalized plans for the large tract of land at 500 Scott Road.

“We buy properties from time to time that we view as good long-term holds for Riverstone,” Galanti said in an email. “It probably wants to be some kind of mixed use.”

Goodwin, whose business holdings also include the Jefferson Hotel, built his fortune through various interests, including the sale of AMF Bowling for more than $1 billion in 1996.

His company’s newest property, known as Scott Farm, has been actively marketed for at least the past 10 years. It was owned by the Scott family, which was represented in the sale by brokers Joe Buhrman and Bill Barnett of Commonwealth Commercial.

“It is a good piece of property, it’s high-profile,” Buhrman said. “The highest traffic count in the area is right there in that 95 corridor.”

Goodwin, in addition to his reputation in business, is also well-known for his philanthropy. And the Scott Road property could be a piece of a massive nonprofit project for which Goodwin has voiced his support.

Goodwin has been an active advocate of the construction of a freestanding children’s hospital in Richmond. He has pledged $150 million to the Virginia Children’s Hospital Alliance, which is headed by former Capital One executive Katherine Busser.

At a recent event, Busser described the ideal site for the hospital, but said the nonprofit has not yet made a final selection. The property must be at least 100 acres and easily accessible both by major roads and public transportation.

The alliance issued a request for proposals for potential sites last year and received 26 responses, Busser said at the event.

The entire project is likely to cost between $400 million and $600 million.

Galanti did not respond to requests for comment about the potential development of a children’s hospital on Scott Farm.

But the Scott Road site also has a neighboring piece of land that could support the hospital project. Busser said many commercial properties usually spring up near hospitals, including restaurants and hotels.

The Scott Farm property sits almost directly across from the 93-acre tract formerly home to Best Products. Henrico County purchased that land in 2011, and a report from the Henrico Citizen recently suggested that the site could fit into a plan to land the children’s hospital.

“The county bought that old Best Products corporate center thinking it was a strategic piece of property,” Buhrman said. “One day there will be a user, I’m sure, that will come by and want to buy that.”

Mark Douglas of Cushman & Wakefield | Thalhimer brokered the sale of the Best Products land to the county four years ago. He said the land could be developed in many different ways, possibly as an industrial park, with retail space or with some single-family homes.

The county had released a request for proposal early last year seeking brokers interested in marketing the Best Products property.

But according to Jon Tracy, director of Henrico’s real property department, the county did not follow through with selecting a broker, and the land still doesn’t have a buyer lined up.

Buhrman said Riverstone had been in talks about purchasing Scott Farm since last fall. It closed on the deal in the first week of March.

The Scott family owned it for several generations and most recently had a third party farming the land for them.

At one point, Buhrman said, potential buyers had the option to put together as many as 300 acres in the area, if they purchased both Scott Farm and Cobb Farm, which is located at 400 Scott Road. But in March of last year, Dominion Power snagged the 76-acre Cobb Farm for $5.6 million and is currently working on building a facility there, according to Henrico County records.

St. Gertrude High School’s outdoor athletic facility also sits directly between Scott and Cobb farms, on 16 acres that the Benedictine Sisters of Virginia bought for $370,000 in 2010.

At one point, Scott Farm itself was even larger than its current 99 acres, but when I-295 was built, it cut through a portion of the land. Buhrman said the infrastructure actually made the farm a better piece of property, and the extra visibility may have helped in finding a buyer.

“Bill Goodwin has got a vision, and if there’s anybody that can make that land work, it’s going to be Bill Goodwin,” Douglas said.